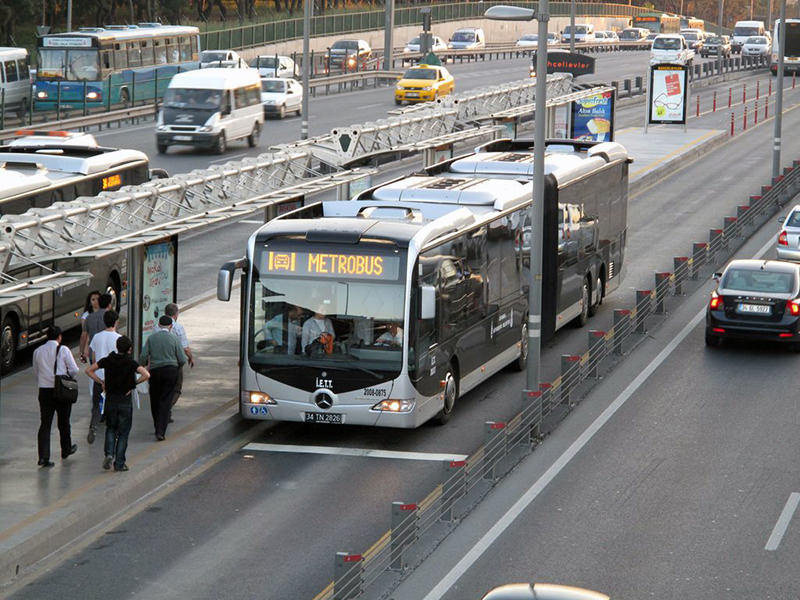 by daily sabah Apr 29, 2015 12:00 am
Public transportation in Istanbul will be facing some closures as the Taksim Square and its vicinity will be shut down on May 1, the date of Labor Day celebrations that often escalate into riots.

The ban on Taksim will also affect daily life in the city as was the case in the past years, with many streets closed down.

The Osmanbey and Şişhane metro stations of the Yenikapı-Hacıosman M2 (Green) line will be shut down, according to media, which are located near Taksim.

A short funicular line connecting Taksim to Kabataş, a main ferry hub, will also be shut down throughout Labor Day.

According to Istanbul's public transportation directorate (İETT), metrobus lines will not conduct trips between the city's European and Asian sides. It was reported that the trips will be limited between Beylikdüzü and Cevizlibağ stations.

The Marmaray line, Istanbul's undersea rail tunnel under the Bosporus strait will be open throughout May 1 according to the İETT, providing an alternative route for those unable to take the metrobus.

Istanbul's City Lines, which operates intercity ferries, cancelled the Üsküdar-Beşiktaş lines until further notice. It was announced that the Karaköy-Kadıköy and Eminönü-Kadıköy lines will be merged on May 1 as Karaköy-Eminönü-Kadıköy and all other ferries will run on weekend/official holiday schedule.

The square, one of the most popular spots in Istanbul, will be off-limits to labor unions or any other groups intending to observe the day there, in line with the Istanbul governorate's order. Riot police will be deployed at the square and streets leading to the square on the city's European side.

Turkish media has reported that more than 10,000 policemen will be stationed in the area to prevent groups entering the square.

In 2014, riots had erupted in Beşiktaş and Şişli, two areas close to Taksim, as violent mobs trying to reach the square clashed with riot police. The Metrobus line was cut off and traffic came to a standstill during last year's riots, forcing hundreds of commuters to walk to work in the early hours of morning. No official statement was made yet on whether the metrobus line would be shut down this year.

Taksim is symbolic for labor unions adhering to leftist ideologies. In 1977, 34 people were killed in the square when shots were fired into a crowd by unknown perpetrators at a time in which political turmoil between proponents of left-wing and right-wing movements was at its height in the country.

After the massacre, Taksim Square was made off-limits to labor unions, and the coup regime that came to power in 1980 declared celebrations illegal. In turn, crowds that gathered for commemoration events were smaller in the years that followed. However, groups associated with terrorist organizations often exploit the rallies by engaging in clashes with police and vandalizing businesses.

Representatives of labor unions including the Confederation of Revolutionary Trade Unions of Turkey (DİSK), the Confederation of Public Workers' Union (KESK), the Union of Chambers of Turkish Engineers and Architects (TMMOB) and the Turkish Medical Association (TTB) signaled in March that they would defy "the illegal ban."

It was reported that leave for law enforcement officials will be cancelled for Labor Day. Last year, more than 30,000 policemen were deployed throughout the city against riots.