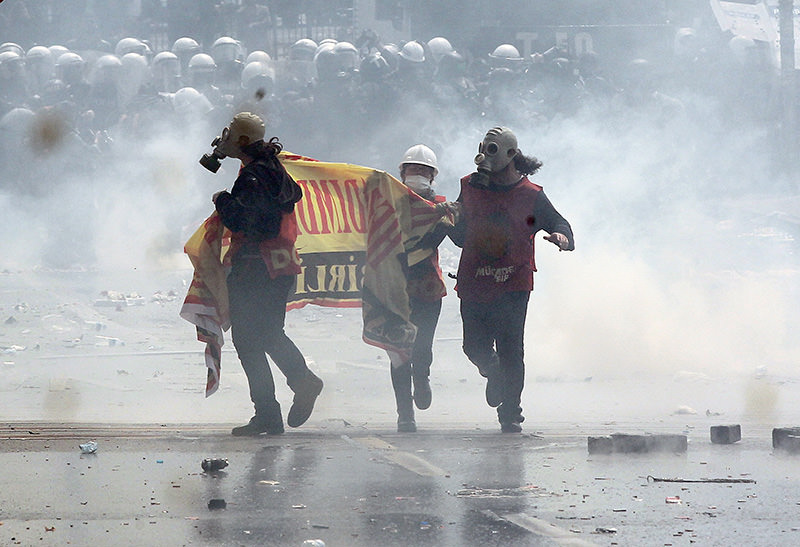 Istanbul marked May 1, the Day of Labor and Solidarity, with scuffles between groups intent on observing the day at a square where rallies were banned and police who blocked some of the city’s main streets, while the day was marked largely uneventful in other cities

Labor Day events got off to a hectic start on Friday in Istanbul as labor unions and marginalized groups that insisted on marking the day at Taksim Square clashed with police who were blocking all roads to the site.

The square, a symbolic hub both for violent riots during the 2013 Gezi Park incidents and the deaths of 33 demonstrators in 1977 during a Labor Day rally, was off-limits to crowds ranging from members of left-wing unions to violent rioters siding with terrorist organizations. Riot police, whose number estimated to be more than 10,000, were deployed in several districts of the city that have been the scene of riots in the past years.

Around 9:00 a.m., demonstrators converged in Beşiktaş, a district close to the square and started marching towards police who set up barricades and deployed armored vehicles with water cannons (TOMA) on the streets. Some groups that were held back by police let off fireworks and hurled stones at the police who fired tear gas and water cannons in return.

Istanbul Governor Vasip Şahin announced 203 people had been detained across the city, as they resisted the police officers who were dispersing unauthorized rallies and clashed with riot police. He also added that six police officers and 13 protesters were wounded during the clashes.

Police helicopters hovered over the city throughout the day, while main and side streets in various districts including Beşiktaş and Şişli were closed to vehicular and pedestrian traffic. Stations of the metro and metrobus line near Taksim were closed from dawn to dusk, while police set up checkpoints to search commuters in commercial districts near Taksim.

Taksim Square was surrounded by countless iron barricades set up overnight and a massive police presence, which led to a virtual shutdown of the square and adjacent İstiklal Avenue, the city's most popular street. Almost all shops on the avenue, which would normally have been swarming with locals and tourists, were closed. The closure of the square by barricades baffled clueless tourists staying at the hotels around the square. Tourists on their way to the airport had to circumvent barricades with their suitcases, venting their frustration at not being able to hail a taxi.

Early in the morning, a handful of representatives of several labor unions laid wreaths on the square after they were allowed by the governorate to enter. As the wreath-laying ceremony ended, a group of rioters from a far-left group who were apparently hiding at a business center overlooking the square, emerged and attempted to run to the square. The police quickly surrounded the group and dispersed them after a brief tussle.

Okmeydanı, a neighborhood in Şişli that has been the scene of riots by supporters of the terrorist organization Revolutionary People's Liberation Party-Front (DHKP-C), witnessed violent groups hurling Molotov cocktails on the police. Marginalized groups are often accused of exploiting large public rallies to stage riots, and Istanbul police seized Molotov cocktails in operations across the city on Thursday.

President Recep Tayyip Erdoğan hosted a large group of workers at the presidential palace on Friday and criticized the insistence on marking the day at Taksim Square. "I find it malignant to insist on it. Taksim Square is not suitable to hold rallies. Holding a rally there would paralyze Istanbul," he said.

His remarks echoed earlier remarks by Istanbul authorities who noted that Taksim's location at the heart of Istanbul made it impossible for large groups to assemble, citing that the ban was necessary to prevent traffic chaos. "You have Yenikapı. It is easily accessible. I told [officials] in Istanbul to give more space for rallies," he said. Erdoğan said he respected the unions' demand to commemorate people killed in 1977, but it was "something else" to have tens of thousands of people in the square. "It will not be a commemoration, it means chaos and we don't see it as something done with good intentions," he said.

The president remarked that terrorist organizations lurked among the crowd. "I heard from the police chief that several [suspects] were caught with Molotov cocktails in their bags," he said.

Labor unions were allocated several public squares larger than Taksim for the rallies by the governorate, while smaller unions observed the day in Taksim.

Elsewhere in Turkey, labor unions observed the day in largely peaceful events. Sıhhiye Square in the capital Ankara hosted tens of thousands of people from several unions who were allowed on to the site after passing through a police checkpoint.

Hak-İş and Memur-Sen, two major unions marked the day in the central city of Konya. Participants sang songs and recited passages from the Quran during the celebration. Kamu-Sen, whose members are civil servants in the public sector, observed the day in Adana in southern Turkey, while Türk-İş, a labor union associated with right-wing groups rallied in Zonguldak, northern Turkey's coal hub.
Last Update: May 02, 2015 5:23 pm
RELATED TOPICS