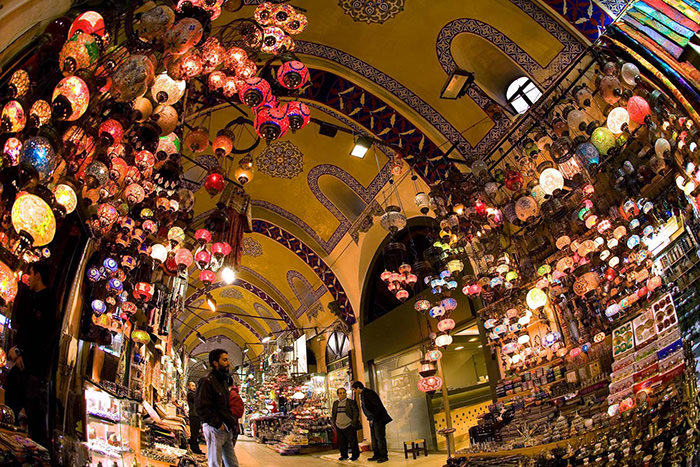 by Daily Sabah May 07, 2015 12:00 am
Istanbul's iconic Grand Bazaar will undergo restoration while officials mull converting parts of the huge marketplace where storage buildings are located as hotels in a bid to boost tourism in the area

A facelift for Istanbul's historic Grand Bazaar, which is in urgent need of reparation, raised eyebrows following reports in Western media that the site would be converted into a hotel. Mustafa Demir, mayor of Fatih district where the Grand Bazaar and many other historical landmarks in the city are located, said they only plan to convert two hans or inns, currently used as storage spaces by shopkeepers, into hotels.

The Grand Bazaar, whose history dates back to the 15th century, was in the headlines when a group of shopkeepers were forcefully evicted in April after they refused to be evicted despite the termination of their lease. Reporting on the incident, Britain's The Guardian reported that the local municipality was planning to mine the bazaar and its environs for profit in a large-scale project to turn more than 1,700 historical buildings into hotels.

Demir flatly denied reports and said they were only planning to convert two inns into hotels after they reached a deal with property owners. Two inns have exits independent of the bazaar whose main exits are closed in the evening. Demir, who spoke at a workshop meeting on the future of the Grand Bazaar and historic peninsula housing landmarks from Blue Mosque to Hagia Sophia, said the projects aimed to preserve the historical texture of the Bazaar.

Demir said the iconic marketplace suffered from "visual pollution" due to modifications to the shops and crumbling infrastructure that led to the Bazaar to getting inundated in heavy rain.

The Grand Bazaar, one of the oldest of its kind in the world, covers 45,000 square meters. It has 3,125 shops and 25,000 employees. The bazaar is visited by 91 million tourists every year and remains one of the most popular tourist destinations in Istanbul.

Despite its cultural and economic importance, the bazaar has been neglected in terms of renovation and restoration due to multiple ownership, despite the fact that it has fallen into a state of disrepair over the years. The Municipality of Fatih district where it is located, readied a renovation project for the bazaar and set aside TL 25 million ($9.2 million) for the restoration and renovation.

Demir says that the inns, currently empty, cannot afford to remain unoccupied. "After seven in the evening, the area becomes deserted (as the businesses close). If they are reopened as hotels, this area will be enlivened with activity in the evenings as well. So, what we will have is giving a new life to these places. When the Grand Bazaar is closed, there will still be activity here," he said.
Last Update: May 08, 2015 2:03 am
RELATED TOPICS