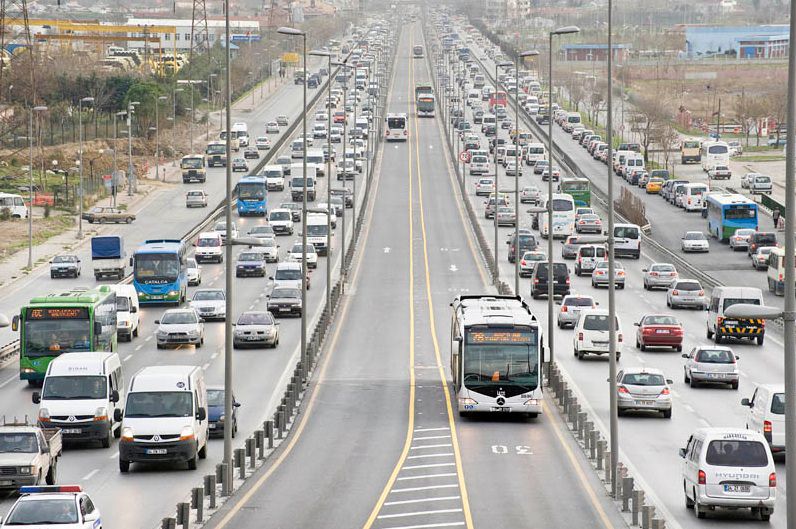 Istanbul, besides its beauty and landmarks, has also gained worldwide fame for its congested traffic, whereas a study shows mass transport provides up to six or seven times advantage in terms of money and time for commuters, with seven times less CO2 emissions

According to a recent study released by Istanbul's public transport body İETT, mass transport is up to six or seven times cheaper and 40 percent faster than private commute by cars.

The study shows that a round trip between the residential Kartal district on Istanbul's Anatolian side and Atatürk International Airport on the European side costs TL 9.20 ($3.46) and takes 160 minutes by public transport, whereas the same route costs TL 63.67 ($23.95) and takes 270 minutes by car. Similar results were also achieved for three other routes crossing the Bosporus: The price and time advantages on Pendik-Edirnekapı, Eminönü-Sabiha Gökçen Airport and Sultanbeyli-Cevizlibağ routes are respectively TL 51.37 - 30 minutes, TL 53.47 - 20 minutes and TL 54,37 - 20 minutes.

The route between Yenibosna and Sarıyer districts located on the European side costs TL 11.90 and takes 110 minutes by public transport, whereas the same trip by car costs TL 54.67 and takes 160 minutes. The price and time advantage for Beşiktaş-Şirinevler route was calculated as TL 48.37 and 30 minutes.

The costs can be further reduced if monthly passes are used, for example, Yenibosna-Sarıyer route costs TL 5.64 with a monthly pass and TL 2.28 with a student pass. The cost of the same route with regular fare can be also reduced to TL 9.5 if express lines are not used.

The study predicts that the gap among public transport and cars will further increase as 465 new cars join into Istanbul's traffic each day.

The İETT's study also focuses on CO2 emissions, which again proves around seven percent advantage for public transport compared with cars. The CO2 emission of a bus on Kartal-Atatürk International Airport route is 1,405 grams when applied per passenger, whereas this number increases to 10,252 grams in cars. Again for Yenibosna-Sarıyer, Pendik-Edirnekapı, Eminönü- Sabiha Gökçen Airport, Sultanbeyli-Cevizlibağ and Beşiktaş-Şirinevler routes, cars produce 6.2 or 6.3 times more CO2 emission than public transport.

The İETT study also quoted interesting facts from Michigan University faculty member Doctor Michael Sivak's study published in 2012. Accordingly, 80 percent of the people at the age of 18 had driving licenses in 1983, while this number dropped to 60 percent in 2010. The average annual mileage of a car in Japan had dropped from 12,000 kilometers in the 1990s to 9,000 kilometers in 2010. The trend of car ownership is also decreasing in London since 1990. While automotive brands are losing their place brand perceptions in young people, they are being replaced by technology brands, and generation Y perceives car ownership as a tool rather than an inspiration. Thirty-three percent of all car owners were below the age of 30 in 1983 and this number had dropped to 22 percent.