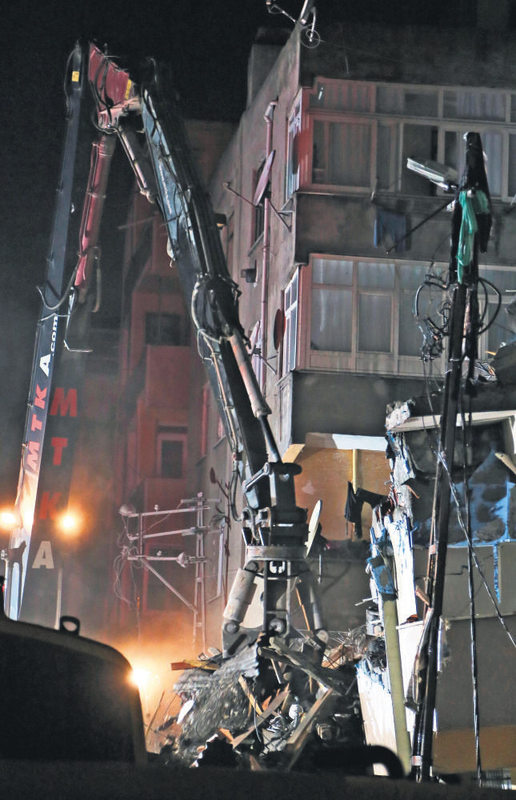 by Daily Sabah Jun 14, 2015 12:00 am
A building in Istanbul's Gaziosmanpaşa neighborhood on the European side was demolished yesterday after it started to lean heavily to one side. Istanbul municipal officials said the metro construction underneath was the direct cause, adding that the land where the building was located is structurally unsound.

All residents of the building and its surroundings were evacuated after the structure started to lean while police took the necessary precautions to prevent anyone from entering the area. No one was permitted into the building, but people were allowed to remove their valuables from neighboring buildings.

The building was demolished piece by piece while water was sprayed over the debris to prevent dust.

Istanbul Metropolitan Municipality said in a statement that the damage to the building was being investigated and assured the public that the Mecidiyeköy-Mahmutbey metro construction process was proceeding in accordance with globally accepted safety standards.

Tunnel boring machines (TBM) are being used in the project, the municipality said, adding that all necessary safety precautions, including detailed surveys of the area being dug, were regularly taken together with geo-technical measurements and assessments of buildings near the building site.

The municipality described the damage to the building as an anomaly that could not be foreseen and that the incident was investigated in detail. It also said that the project would continue once safety measures cited in the technical reports are in place.
Last Update: Jun 14, 2015 11:10 pm
RELATED TOPICS