Crime rate in Istanbul drops, detention rate on the rise 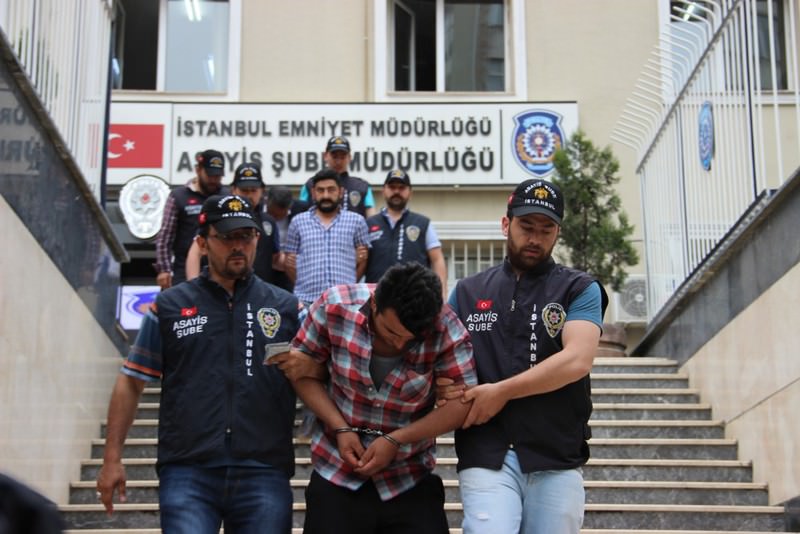 Police officers escorting suspects detained in May for a bank robbery. Istanbul has experienced a drop in the crime rate combined with a high rate of detentions, an improvement compared to past years.
by Daily Sabah Jun 24, 2015 12:00 am

Figures released by the Istanbul Police reveal that the crime rate dropped 13 percent in the first five months of 2015 compared to the same period last year, while the detention rate skyrocketed in Turkey's largest city

Istanbul Police are boasting about a drop in the crime rate and a record increase in detention rates in the first five months of 2015 compared to last year. A total of 15,500 people were detained for a diverse range of crimes during that period, a 140 percent increase compared to 2013 and a 70 percent rise in comparison with figures for the first five months of 2014.

The crime rate also dropped by 13 percent compared to last year, statistics show. A total of 63,600 crimes were registered in the first five months of 2014 compared to the slightly more than 55,000 crimes during the same period this year, according to figures by Istanbul Police's Public Security Department.

Istanbul, with a population of more than 17 million, attracts both local and foreign criminals. Police announced 28 gangs have been eliminated since the beginning of the year, and 164 members of those gangs were apprehended. Police said gangs included a network of robbers involved in mugging victims after they left banks and a gang responsible for a string of car thefts in the city. Twenty-four bank robbers have also been captured since January.

The detention rate was distinctly higher than the first five months of 2014 with a 70 percent increase, or 15,500 people. Nevertheless, only 1,600 of them were arrested under court orders, while the others were released pending trial or found not guilty. Though Turkey has tough laws in place for crimes ranging from theft to rape, many defendants are released pending trial due to different interpretations of laws by the courts. Judges often order the release of the accused pending trial for petty crimes, a trend that experts attribute to the country's overcrowded prisons.

Police figures reveal that the highest detention rate was for those convicted of theft. A total of 500 people were detained on charges of theft in the first five months of 2015, a 100 percent rise compared to the same period last year. Only 190 of them were arrested and sent to prison by the courts, however.

Despite its large and socioeconomically diverse population, Istanbul is among the safest cities in Europe according to a survey by The Economist. Apart from more effective law enforcement, the drop in rates in the past decade is attributed to the ubiquity of security cameras. Authorities have installed more than 500 cameras all around the city for MOBESE (Integrated Mobile Electronic System), a network of cameras controlled via a command center monitoring criminal activities.
Last Update: Jun 24, 2015 7:53 pm
RELATED TOPICS