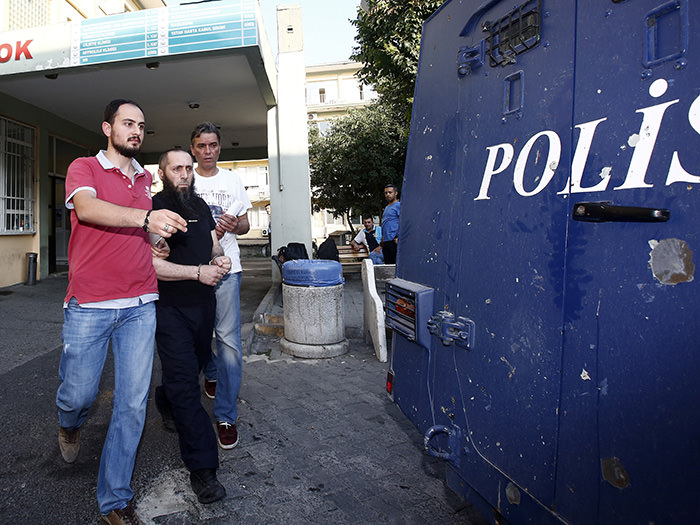 by Daily Sabah with AA Jul 10, 2015 12:00 am
After arresting dozens of people with suspected links to the Islamic State of Iraq and al-Sham (ISIS) terrorist group earlier this month, police raided a number of addresses in four provinces early Friday morning, taking 21 people, including three foreign nationals, into custody. The simultaneous operations were carried out in Istanbul, Kocaeli and the southern provinces of Mersin and Şanlıurfa.

Police reportedly had a list of 30 ISIS suspects in Istanbul. One of the operations was carried out amid tight security in the city's working-class Gaziosmanpaşa district. Two automatic rifles, a large amount of ammunition, organizational documents and military uniforms were seized in the raids. The three foreign suspects were reportedly preparing to go to Syria. Detainees were taken to police headquarters in the various provinces after health checks.

Dozens of others with suspected links to ISIS were detained in raids in five cities in Turkey earlier this month. They were charged with financially supporting and recruiting militants for the organization.

Five suspects in Ankara, one in Konya, three in Adana, seven in İzmir and one in Gaziantep were detained in police raids orchestrated by the anti-terror branch directorates of local police departments. The suspects were taken to police departments and it was reported that 13 Syrian and Iraqi citizens named in the investigation file in İzmir were not captured because they are not in Turkey.

Documents linked to the organization and digital items were confiscated in searches during the raids and, reportedly, most of the suspects are tradesmen who supply financial support to the terrorist organization. Again, the İzmir Police Department launched an operation on the same day based on allegations that militants entered Turkey from Syria. Twenty-two residences were targeted in the operation, and seven people were detained in the cities of Isparta, İzmir and Erzurum. Police confiscated two guns, ISIS flags and documents suggesting that those detained belonged to the terrorist organization.

Furthermore, three injured ISIS militants who attempted to cross the Turkish border from Kobani with camouflage were arrested after being taken to the court in Gaziantep last month.

As ISIS poses a threat to the security of the country, Turkey continues to take measures against the terrorist group and foreign fighters who want to join the organization. At the most recent National Security Council (MGK) meeting held on June 29, Prime Minister Ahmet Davutoğlu declared that additional security measures were discussed and they will work toward their implementation.

Turkey has been doing its part to identify and deliver potential foreign fighters seeking to cross the border to Syria to join ISIS despite little cooperation in intelligence sharing from its Western allies. As part of Turkey's efforts, the police force has tightened security at transfer points such as airports, terminals, bus stations and rental car companies with a special risk analysis system, and a team tasked with tracking suspicious foreigners who travel to Turkey for the first time and those who are minors who do not have hotel reservations.

Sources at the Prime Ministry released statistical data regarding the fight against ISIS. Since the official declaration on Oct.10, 2013, which defined ISIS as a terrorist organization, Prime Ministry sources indicated that 1,350 people have been deported and 13,500 people from 98 countries have been barred from entering Turkey. It said that 18 percent of the 13,500 people who were barred from entry originated from Europe and North America and 56 percent originated from North Africa and the Middle East. On the subject of Turkish participants joining ISIS, sources asserted that 800 to 900 Turkish nationals had joined of the estimated total of 25,000 ISIS fighters.

Regarding accusations that Turkey's border security is subpar, the sources said that Turkey shares a 1,300-kilometer border with Iraq and Syria, which is a challenge to control. Nevertheless, sources say that the Turkish Land Forces Command patrols the land border 24 hours a day with drones and reconnaissance aircraft. Furthermore, it has installed lights on a 270-kilometer stretch of the Syrian border; renewed a 1,210-kilometer patrol route; is digging 363 kilometers of trenches and building 90 kilometers of wire fences, 68 kilometers of embankments and 7 kilometers of concrete walls. The sources stated that more than 48,000 border crossings were intercepted and 175,000 people were caught since the start of the Syrian civil war in 2011.