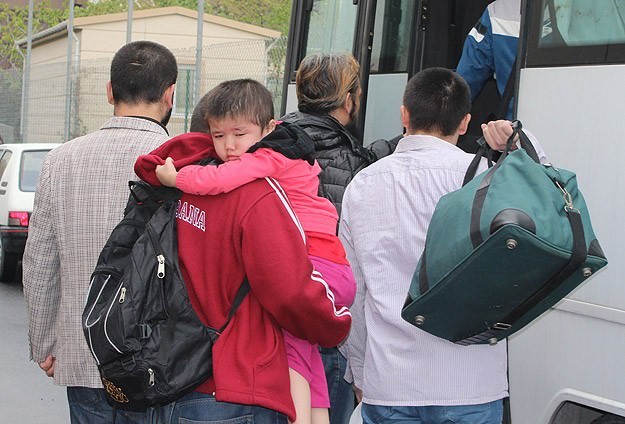 by Anadolu Agency Jul 11, 2015 12:00 am
Eight more Uighur Turks arrived at Istanbul airport in Turkey on Saturday morning after around two years in Thai immigration centers.

Turkish humanitarian aid foundation Cansuyu Organization confirmed to Anadolu Agency that the four women and four children are in addition to the 173 who arrived earlier in the month.

It added that around 55 more Uighur remained in Thailand, and it was also trying to bring them back to Turkey.

An Anadolu Agency reporter at the scene said that they were accompanied by a representative from the Organization, who said that they had travelled on a Thai Airways Flight from Bangkok.

The arrival comes days after Thailand said that it had sent a further group of around 100 Uighur back to China.

On Saturday, Human Rights Watch claimed that Thailand had separated fathers from their families in deciding who went where.

Sunai Phasuk, the organization's representative for Thailand, claimed in Saturday's edition of the Bangkok Post that female and young family members were sent to Turkey, while the menfolk - and some women - were shipped to China.

Thai authorities have denied the accusations, saying that their policy was not to separate families.

"The immigration police were doing the best to implement that policy," Anusit Kunakorn, secretary-general of the Thai National Security Council, told the Post.

Kunakorn, however, confirmed that of the 173 sent to Turkey, 140 were women and 32 children.

Phasuk has previously said that 173 were sent to Turkey, meaning - if correct - that just one adult male was in the party.

Saturday's arrival takes the number to 144 women, 36 children, and just one adult male.

Human Rights Watch stressed in a statement Friday that the deported Uighur face the risk of mistreatment in China.

"Uighur who previously had been forcibly returned to China have faced arbitrary arrest and detention, and criminal prosecutions," it said.