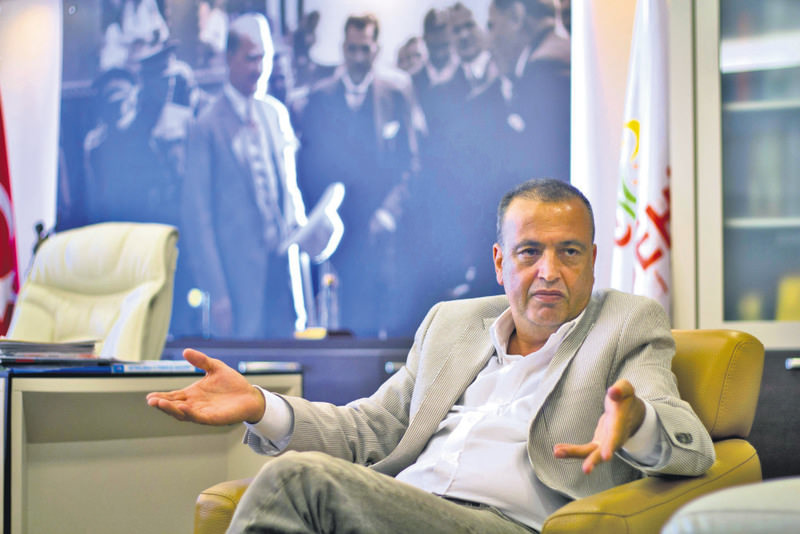 More allegations of corruption emerged on Monday about the mayor of an Istanbul district and his lawmaker wife from the opposition CHP as the mayor asked a court to investigate the allegations, claiming the family's purchase of a dozen flats in the Buz Residence, a posh skyscraper, was through legally earned money

Battal İlgezdi, the mayor of Ataşehir, a district on Istanbul's Asian side, and his wife Gamze Akkuş İlgezdi, a newly-elected lawmaker from the Republican People's Party (CHP), are battling allegations of corruption in what the Turkish media dubbed "BuzGate" after the skyscraper where the couple purchased 12 flats for an undisclosed price. The revelation has led many to question how the couple accumulated the wealth for multiple acquisitions in a skyscraper located in an upscale district of Istanbul.

İlgezdi, flanked by the CHP's Istanbul chairman, Murat Karayalçın, arrived at an Istanbul courthouse on Monday and asked the prosecutor's office to "investigate" claims against him, denying the accusations that he and his wife amassed a fortune through corruption and covered up their wrongdoings through threats. Speaking to reporters, İlgezdi, a former contractor, repeated his claim that the money he and his wife spent for the purchase was earned through legal means, while he did not disclose how much the couple spent for 15 flats in two skyscrapers. According to an online ad, the minimum price of a standard flat in the Buz Residence skyscraper is listed as TL 550,000 ($206,896). The Star daily reported that three flats Gamze Akkuş İlgezdi bought in another skyscraper was worth $5 million.

Karayalçın said they appealed to the prosecutor's office to inquire whether there was inconsistency in his earnings and purchases, adding the prosecutor will see if the flats are really as expensive as the media outlets claimed.

Although the acquisitions might be perfectly legal, the İlgezdi family faces more serious allegations of corruption in the municipality. Gamze Akkuş İlgezdi, who was appointed as the head of the municipality's health department shortly before her marriage to İlgezdi, is accused of awarding public tenders to the companies she favored. Critics also question how she, as a dentist at a public hospital, saved enough money to buy more than a dozen flats in the heart of Istanbul. Turkish media has quoted İlgezdi had said she was earning TL 14,000 in a month.

On Monday, several media outlets disclosed more allegations against the mayor. He is accused of misconduct in granting building permits and awarding lucrative tenders of the municipality to his friends and relatives.

A whistleblower speaking to Turkish media claimed İlgezdi issued permits to buildings not compatible with building regulations, such as for additional floors. The whistleblower claimed the mayor had connections in the police and judiciary so that he could cover up the claims. Meanwhile, it was revealed that the Interior Ministry had launched an inquiry into the claims of wrongdoings with the Ataşehir municipality in March. İlgezdi and five other municipality officials face charges of misconduct over giving permission to construct illegal buildings.

The CHP, which promotes itself as a staunch opponent of corruption, was relatively silent on the allegations involving the couple that later encompassed Zeynep Kılıçdaroğlu, daughter of CHP leader Kemal Kılıçdaroğlu, who was found to be the owner of a flat in Buz Residence. She had defended the purchase by saying she had the financial means for such an acquisition.
Last Update: Jul 14, 2015 1:15 pm
RELATED TOPICS