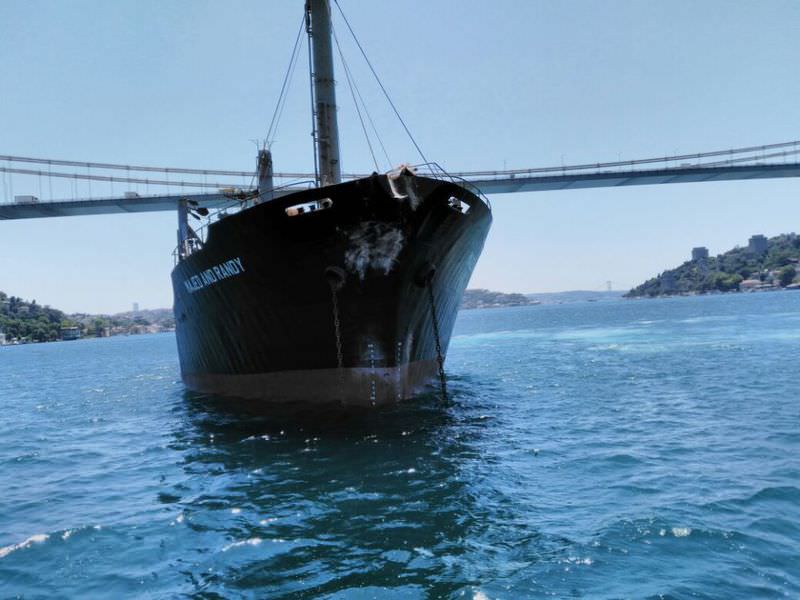 A ship crashed into a waterfront mansion on the Bosporus on Tuesday, triggering safety fears about an international route filled with enormous vessels maneuvering in the narrow waterway. No casualties were reported in the incident that left the mansion damaged

Maritime safety on the Bosphorus, Istanbul's international waterway, is once again under the spotlight, as a vessel crashed into the exterior of a waterfront mansion in the city's Kanlıca district.

Sierra Leone-flagged Majed and Randy, a 106-meter-long cargo vessel, was sailing through the Bosporus, heading toward the Marmara Sea to the south of Istanbul. A fault in the ship's wheel caused the ship to crash into a mansion yesterday afternoon. No casualties were reported in the incident. The mansion's owners, a prominent Turkish Jewish businessman and his family, were in the 19th-century mansion at the time of the incident according to media reports. A room on the second floor of the mansion was demolished in the accident.

The ship, slightly damaged in the accident, anchored under nearby Fatih Sultan Bridge after the accident before it was towed to a safer location.

The scene of the accident was on Istanbul's Asian side, the coast of which is dotted with posh mansions dating back to Ottoman times. Accidents involving ships crashing into those mansions are rare, with vessels escaping the impact at the last minute occasionally. The last known accident was in 2009, when a ship collided into another Bosporus mansion. Still, vessels pose a threat to residences along the coast.

Turkey's straits are among the most at-risk waterways in the world, according to experts. Over 50,000 vessels, including tankers carrying highly flammable oil, pass through the Bosporus, an S-shaped channel with sharp turns and changing currents that pose challenges for vessels and sailors every year. In compliance with the 1936 Montreux Convention, Turkey must allow open access for all civilian vessels through its straits in peacetime. However, accidents concern the country. From 1953-2003, 461 accidents occurred on the Bosporus.

The deadliest accident was when a Romanian tanker and a Greek freighter collided and exploded in November 1979, killing 42 crewmembers aboard the Romanian tanker. The last major accident in the strait was in 2003 when a Georgian-flagged vessel ran aground, resulting in a spill of 480 tons of oil.

To change the course of vessels with potentially dangerous cargo, the government plans to build Kanal Istanbul, an ambitious project to construct a channel through the city's European side.

The main purpose of the project is to reduce marine traffic through the Bosporus and to minimize risks and dangers particularly associated with tankers. International pressure is growing to increase marine traffic tonnage through Turkey's straits, which brings risks for the security of marine navigation during passage.

Arguably, the new channel would further help prevent pollution caused by cargo vessels passing through or mooring in the Marmara Sea at the southern mouth of the Bosphorus.
Last Update: Jul 21, 2015 10:33 pm
RELATED TOPICS