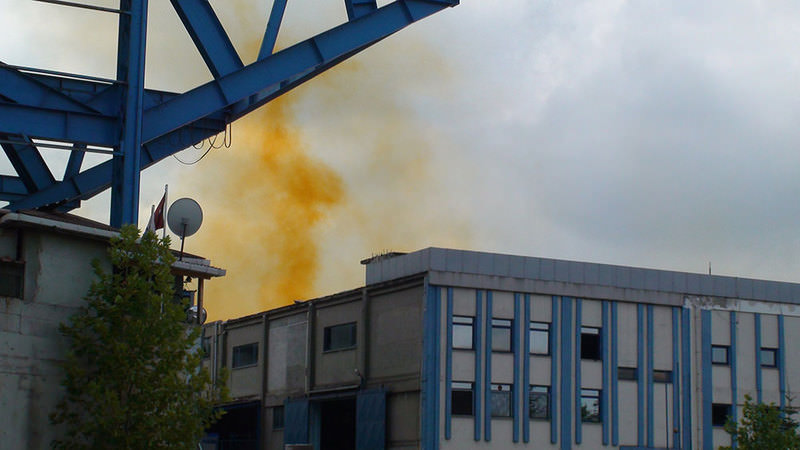 by Daily Sabah with AA Aug 05, 2015 12:00 am
A leak from a chemical tank spewing yellow gas into the air in an industrial zone in Istanbul's Tuzla district on Wednesday caused panic among onlookers.

The cause of the yellow gas was identified as a leak in an acid tank of a factory in the Leather Organized Industrial Zone of Tuzla district.

Workers of nearby factories were evacuated while fire engines and ambulances were dispatched to the scene. The police also took security measures and closed off the nearby roads.

The Istanbul Governorate released a press statement, stating that nitric acid leaking from the tank is being discharged rapidly and safely. The statement also warned citizens of the hazardous effect of the chemical, which causes rashes and damage to the eyes and respiratory system.

No one was injured in the incident, while firefighters donning protective suits transported the leaked acid into a pool adjacent to the tank used to neutralize acid in case of leaks.

News outlets reported the police sealed off an area as far as 1 kilometer from the scene as a precaution.

Science, Industry and Technology Minister Fikri Işık informed reporters about the accident and said the tank has the capacity to hold 20 tons of acid. Moreover, it is believed that it was filled with acid before the tank passed the necessary inspections. He said all measures were in place to prevent nitric acid from damaging the environment.