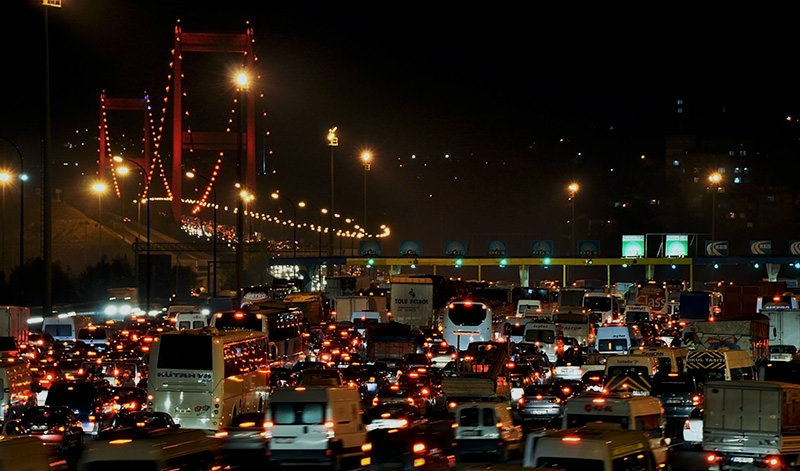 More than 2000 trucks will bypass Istanbul's Bosporus Bridge traffic with the special port project to be built in Ambarlı. Ro-ro ships will carry trucks to Topçular, which is normally a seven-hour-drive for trucks

A special port will be built in Istanbul's coastal district of Ambarlı to harbor roll-on/roll-off (ro-ro) ships that will allow trucks to pass from Europe to Asia without encountering Istanbul's heavy traffic. The ships, which will travel between Ambarlı and Topçular north of the Marmara Sea, will eliminate 2,000 trucks from Istanbul traffic on a daily basis.

Before realizing the port project, which will be constructed on a 162,373-square-meter area belonging to the Treasury and the Istanbul Metropolitan Municipality (İBB) in Ambarlı, the Environment and Urbanization Ministry will inform the public in accordance with the Environmental Impact Assessment (EIA) regulation on Aug. 20 in Beylikdüzü.

As a result of studies initiated in 2008, the route of the ro-ro line was selected from among 17 routes, and its zoning planning changes were approved by the İBB on March 10, 2014. Then, it was submitted to the İBB's Department of Environment and Urban Development to receive an EIA report. The port and ro-ro ships project will be undertaken by İDO A.Ş. - the Istanbul ferry firm that was purchased by the joint venture of Tep-Akfen and Souter-Sera as part of a privatization plan in 2011 that operates 53 ferries in 35 terminals. Ro-ro ships will be loaded in half-an-hour in Ambarlı and reach Topçular, which is 300 kilometers away, in two hours.

During the hours with the heaviest traffic, travel from Ambarlı to Topçular over land lasts for seven hours. The project is expected to alleviate heavy vehicle transit in the city and traffic congestion stemming from trucks. The ro-ro port, which will be constructed on parcel no. 1 and parcel no. 2 of the 779th block, is estimated to cost TL 110 million ($39.56 million). The number of vehicles that transits per week is 85,212, and the number of heavy vehicles that can travel on the ro-ro line to be constructed on the Bandırma route will be 85,043 per week. The line will be integrated into different routes in the upcoming periods as well. Ro-ro transportation will be on 200-meter-long, 30-meter-wide RO-PAX ships that travel at speeds of up to 20 nautical miles per hour. The ships will have a restaurant, a grocery store, rooms, bathroom and shower facilities, a barbershop and an ATM.

The port will be built 545 meters from the shore of the Marmara Sea, starting from the shoreline. It will have two berths: One 150 meters long and the other 230 meters long. The landing stage that will be built on a filled area should be completed and opened for operations within three years after the necessary permits are obtained. In the first stage, bi-directional ro-ro transportation will reach Bandırma from the north-south direction. Transportation companies mostly want a ro-ro line on the Ambarlı-Bandırma route, while production companies opted for a ro-ro line on the Ambarlı-Gemlik route. In the first stage of the project, the Ambarlı-Topçular line will be put into service.

According to the EIA report, the project will bring the following economic advantages: It will reduce the traffic accident rate, as it will allow drivers to rest during the cruise, expand the lifespan of vehicles, reduce carbon emissions in the environment, prevent the wear and erosion of highways and decrease repair costs.

The decrease in fuel consumption will be a major contribution to the country' economy, and Istanbul traffic will be relieved. With the port entering into force in line with the master plan, 150 people will be employed, while another 1,000 people will be indirectly employed in other sectors that render service to the port. Additionally, a total of 75 staff members will work on the construction project.