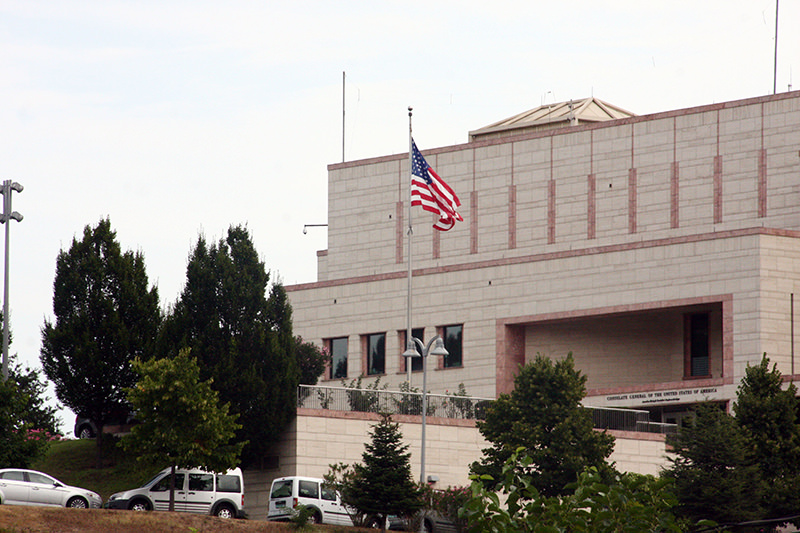 | IHA Photo
by Daily Sabah Aug 10, 2015 12:00 am
Two suspected members of the terrorist far-left Revolutionary People's Liberation Party-Front (DHKP-C) opened fire on the U.S. Consulate in Istanbul on Monday morning and fled when police shot back.

The attack was conducted by two women, one of whom has been wounded and captured, the Istanbul governor's office said. One of the attackers, 42-year-old Hatice Aşık, was apprehended by security forces. According to police sources, Aşık was designated as a potential suicide bomber candidate by the far-left group. Photos of Aşık had been distributed to security units throughout the country after it was claimed that she had plans to launch a suicide attack on the Justice Ministry in September. Police units have launched a large-scale operation to find the other attacker.


The attack came shortly after an overnight car bomb attack at a police station in Istanbul's Sultanbeyli district injured 10 people, including seven police officers, and caused a fire that collapsed part of the three-story building. Three terrorists were killed in clashes that erupted in the aftermath of the attack.

The U.S. Consulate said their services will be closed to the public until further notice:

Incident this AM near US Consulate Istanbul. Working w/ Turkish authorities to investigate. Consulate closed to public till further notice.


The Turkish Foreign Ministry released a statement on late Monday, saying Turkey condemns the terror attack on the U.S. Consulate and security measures in the U.S. diplomatic missions have been increased.

DHKP-C member Aşık was wounded and then apprehended in a building near the consulate by security forces. According to an eyewitness, the other assailant is allegedly Engin Yüksek, a Sariyer district resident, and is also female. Yüksek said police demanded that the suspects, who were carrying bags, surrender, but one of them replied: "I will never surrender to you. We've come here to take revenge for the Suruç [attack]."

On July 20, a suicide bombing in the southern Turkish town of Suruç killed 32 people who had been planning to engage in efforts to rebuild the Syrian town of Kobani after it was devastated by clashes involving the Islamic State of Iraq and al-Sham (ISIS). The country has since witnessed a wave of bombings, shootings and arrests. Turkey has responded by arresting more than 1,300 suspected supporters of illegal groups, including ISIS, the PKK and the DHKP-C.

Commenting on the raids against the DHKP-C, ISIS and the PKK, Prime Minister Ahmet Davutoğlu said all these terrorist organizations have only one aim, and that is to "drag Turkey into chaos," and added: "The operations [against ISIS, the PKK and the DHKP-C] will continue as long as the threats remain."

In 2013, a DHKP-C militant carried out a suicide bombing at the U.S. Embassy compound in Ankara, killing a Turkish security guard.

The DHKP-C is an offshoot of a Marxist-Leninist movement that was established in the 1970s. The DHKP-C was founded in the 1990s after it splintered from a larger group of far-left organizations responsible for a string of attacks that include the assassination of two politicians in 1980, several intelligence officials and prominent businessman Özdemir Sabancı. It kept a relatively low profile for many years and its attacks were relatively minor compared to the PKK's, another terrorist organization active in Turkey. However, it has stepped up its attacks over the past two years.

The DHKP-C also claimed responsibility for non-lethal rocket attacks targeting the Justice and Development Party (AK Party) headquarters, the Turkish National Police headquarters and a Justice Ministry building in Ankara in 2013. The group, designated a terrorist organization by Turkey, the U.S. and the EU, advocates a far-left ideology, and its members do not have a homogenous ethnic background like the PKK, which mainly draws support from Kurds. The DHKP-C's power has significantly declined since the death of Dursun Karataş in 2008, one of its founding leaders.