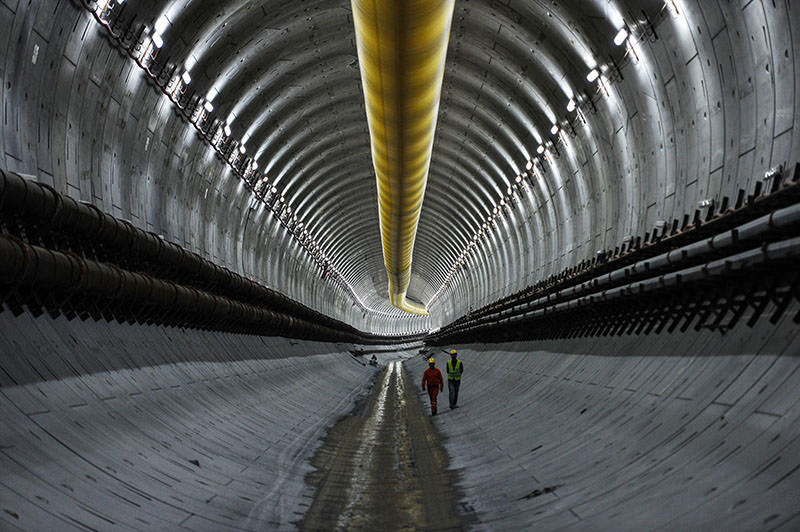 | AA Photo
by Daily Sabah with AA Aug 15, 2015 12:00 am
Only 75 meters are left to connect the two sides of the 5.4 kilometer undersea motorway tunnel being built between the European and Asian sides of Istanbul, Transportation Minister Feridun Bilgin said over the weekend. The tunnel, which will be operational at the end of 2016, will connect the Kazlıçeşme neighborhood on the European side to Göztepe in Asia and will cut the travel time between the two congested areas to 15 minutes.

"There are 75 more meters to dig under the sea. It is one of the most prestigious engineering projects in the world. The digging started in April 2014 and is expected to be completed by the end of the month," Bilgin said, adding that the project was cited as a successful example of private-public partnership.

The tunnel is also protected against earthquakes through seismic joints planted at two separate sections. The minister said the European Bank for Reconstruction and Development (EBRD) had awarded the project with the Environmental and Social Best Practice Award due to the high standards kept during the construction. "The project is financed with $1.245 billion in credit. The consortium that is building it will manage it for 24 years and five months before handing it over to the public," he said.

In December 2006, Turkey's Transport and Communication Ministry tendered the project under the name of the Istanbul Bosporus Tube Crossing Project.'

The project was contracted in 2009 with the cooperation of a Turkish-Korean joint venture, which was later named as Eurasian Tunnel Operation Construction and Investment-ATAS-in 2011.

The Eurasia tunnel will be Turkey's second underwater project in Istanbul after the Marmaray, a railway tunnel underneath the Bosporus Strait which has already transported around 21 million passengers in the first six months following its inauguration in October 2013.

Davutoğlu had described the 6.5 km-long tunnel as the first of its kind in the world, as it is comprised of one rail system between two highways for motor vehicles 110 meters under the Bosporus Strait.

Moreover, a third bridge over the Bosporus is currently in construction and is expected to be ready by the end of 2015. IC ICTAS Construction Company, which is building it, claims the structure will be the widest (59 meters), longest (1,048) and highest (320) bridge in the world.

Despite being noticeable improvements, these projects have struggled to diminish traffic flow in the city.

According to many transportation experts, Istanbul's traffic still needs a permanent solution-which is expanding the railways across the city.

Indeed, the city has plans to add more than 600km of metro railway to its current 150km network by 2019.

However, until then, Istanbulites may have to content themselves by honking their horns.
Last Update: Aug 16, 2015 1:34 pm
RELATED TOPICS