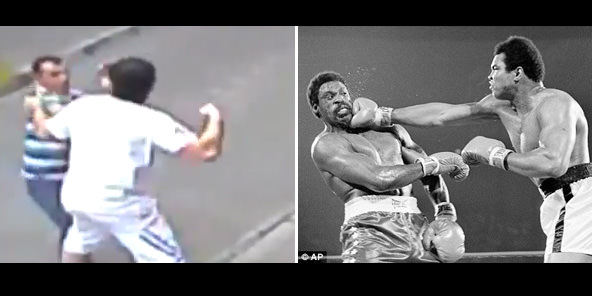 by Daily Sabah Aug 26, 2015 12:00 am
During his visit to Istanbul's Aksaray district an Irish tourist knocked out a few men in the area on Tuesday after a fight broke out between a store owner who attempted to attack him.

In the video footage from Turkey's ShowTV, which has gone viral on social media, the Irish man, who was identified as Mohammed Fadel Dobbous, an Irisih citizen of Kuwaiti background, walks to a store to pick up a bottle of water, but as he opens the door of the refrigerator, dozens of water bottles drop on the ground. Seeing the incident, the store owner walks out immediately with a stick in his hand and attempts to hit the Irish man. A few moments later, the store owners in the area join him in assault against the tourist. What the store owner and the other men in the area was not expecting is that the Irish man turns out to be a professional boxer, who was already having his ring-ready guard up. The Irish man respond to the men with a series of punches, knocking them down one at a time.

During the fight, the men in the area who joined the fight were seen using chairs, sticks, and other tools to hit the Irish tourist, but they were unsuccessful against their rival.

After the fight both the Irish tourist and the men in the area went to the police station to file complaints.

Speaking to İhlas News Agency on Wednesday, Şenol Palan, owner of the grocery store, who first jumped on the Irish tourist, defended himself and claimed it was the man who started the fight. Palan said the man and his friend came to his shop to buy alcoholic beverages and he told them he did not sell alcohol. He said they then started arguing and he told the man to leave his shop but he returned with two friends, apparently to beat him up. Palan said he was angered and grabbed his stick when he saw the man returning with two friends and "dropping the water bottles in the fridge."

Eyewitnesses said a street vendor who was seen in the video receiving a strong punch to the face had two teeth broken by the Irish man.

Şenol Palan said his reaction to the Irish man, who he described as "Moroccan," was rational after he saw him returning with his friends. "Everybody would do the same thing. You can't let some Moroccan mess up your shop while you do nothing," he said.