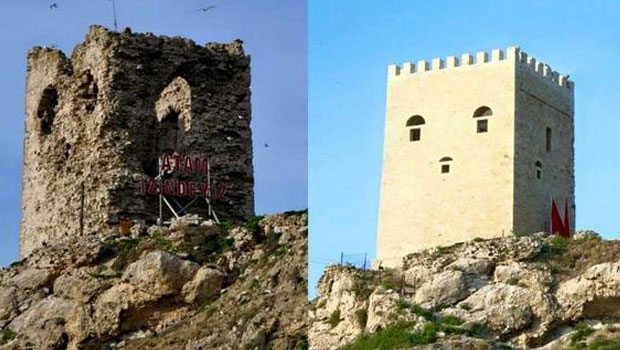 by Daily Sabah Aug 27, 2015 12:00 am
Located in Istanbul's Şile district, the 2,000-year-old Ocaklı Ada Castle has fallen victim to a botched restoration job, as the newly restored castle resembles the popular cartoon character SpongeBob SquarePants more than the old version of the historical castle.

The restoration work of the castle, which was initiated in 2012 by the Şile Municipality, was completed this month after three years of work. However, the finished product, which is supposed to be a "renovated castle," is stirring controversy, especially among social media users.

The Şile Municipality has not commented about the castle's aesthetics despite fierce ongoing criticism and mockery about the restoration work on social media. "The renovation of Ocaklı Ada Castle began through the collaboration of the Şile Municipality and the Kocaeli University Faculty of Architecture and Design," is the latest update about the process on the municipality's website.

Even though some researchers claim that the castle was constructed by Byzantine Emperor Andronikos for observation purposes, the latest findings reveal that Ocaklı Castle was built by the Genoese 2,000 years ago and was renovated twice, once by the Byzantines and once by the Ottomans.
RELATED TOPICS