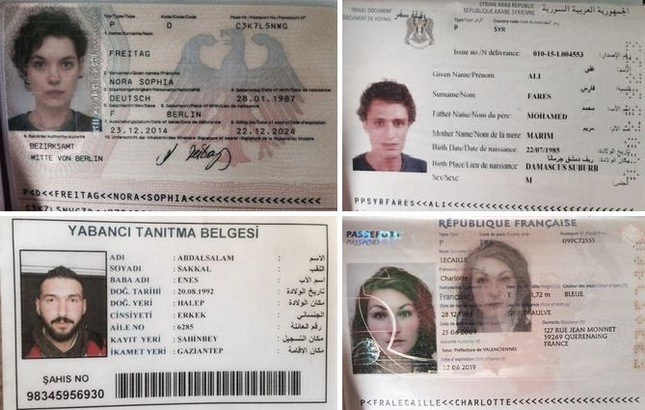 by daily sabah Sep 22, 2015 12:00 am
Five people, including a German and a French national and three Syrians, who were arrested on Monday in Istanbul for encouraging Syrian refugees to head for Turkey's border to illegally travel to the EU, will be deported, security sources told Daily Sabah.

Among the suspects, Nora Sophia, identified as a German national, was detected working for Germany's Federal Intelligence Service Bundesnachrichtendienst (BND), while Charlotte Lecaille, a French national, was believed to be working for French external intelligence agency DSGE.

Reportedly it is said that both Sophia and Lecaille introduced themselves as "journalists" during their detention, however they could not show a press card.

Security sources indicated that they have been active since 2013 in a group called Anarchists, which had played a part in the Gezi Park anti-government protests and participated in the group's camps in İzmir when they came to Turkey for the first time. It is also believed by security sources that both German and French intelligence units supported and guided the group's activities.

Furthermore, it was reportedly revealed that three Syrian suspects, Abdalsalam Sakkal, Ali Fares, and Mohammed Fares, were given money and living in Europe.

A prosecutor demanded they be deported after being delivered to the Istanbul office of the Director General of Migration Management.

The suspects were accused of aiding and abetting refugees in circumventing police restrictions on migrants heading for Edirne, which borders Greece and Bulgaria.

Earlier Monday, police intercepted a 500-strong group of Syrian refugees walking along a highway near Istanbul towards the province.

More than 1,500 refugees have been waiting in Edirne for 10 days to cross the border.

Millions of Syrians have fled their country since war broke out in 2011 and Turkey is now home to the world's largest refugee population, including 1.9 million Syrians.

Turkey has frequently detained and arrested many foreign citizens on charges of spying activities for other countries or terrorist organizations. Early in April, authorities arrested Mohammed al-Rashed, a Syrian human smuggler working for a Canadian spy agency.

Turkish media outlets revealed how he helped three British girls and other foreign nationals to cross into Syria to join the Islamic State of Iraq and al-Sham (ISIS). Rashed was apprehended on Feb. 28 by security forces. Along with documents and information found in his possession and on his laptop, a video showing Rashed aiding three missing British girls, Shamima Begum, 15, Amira Abase, 15, and Kadiza Sultana, 16, was also found. According to the police statement, Rashed came into contact with Canadian officials in 2013 when he sought asylum in Canada. Rashed said that Canadian officials asked for information regarding ISIS's operations in return for citizenship.