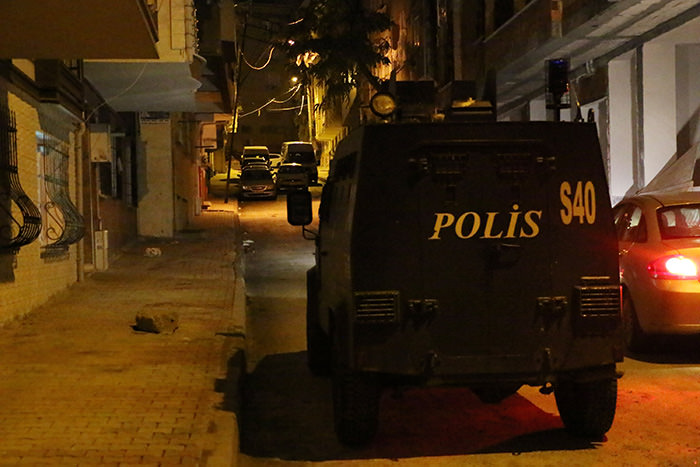 |DHA Photo
by daily sabah
Oct 02, 2015 12:00 am
The counter-terrorism branch of the Istanbul Police Department on Friday launched a wide-range operation on predetermined suspected addresses in several districts, leading to the detention of four district heads for the Peoples' Democratic Party (HDP).

A number of weapons were seized and 44 people suspected of affiliations with PKK terror organization were also detained during the operation. According to local media sources, the HDP heads are from the Istanbul districts of Beşiktaş, Şişli, Eyüp and Beylikdüzü.

Although the PKK terrorist group and the HDP do not officially have ties, the PKK strongly supports the HDP. HDP deputy Abdullah Zeydan had made provocative statements and threatened Turkey in late July, saying that the terrorist organization PKK has the power to "suffocate Turkey with its spit."

The operation, which was supported by special task forces, covered 28 districts of Istanbul, including Sultangazi, Bağcılar, Esenyurt and Başakşehir.

In another incident showing the relations between the two groups, Turkish security forces on September 7 had detained nine people, including Şafak Özanlı a HDP deputy from Kars, for transporting food and other supplies to the PKK terrorist organization.

The PKK utilizes a "political style," which instills fear and uses force, which includes kidnapping people, attacking ruling AK Party members and threatening people in the Kurdish dominated regions in Turkey's eastern provinces, in order to influence voters to choose the HDP.

Renewed violence has threatened the reconciliation process officially initiated in early 2013, aimed at ending the 30-year conflict between the PKK and the Turkish state.