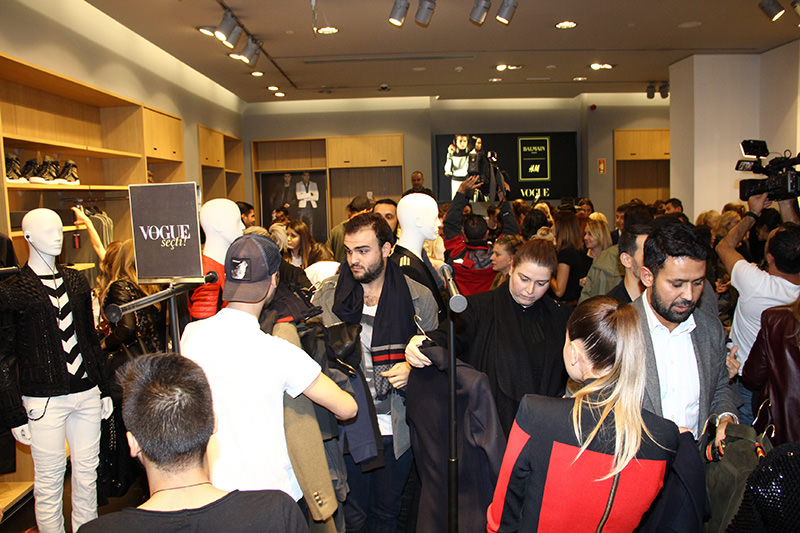 
The footage above is not from a refugee camp showing hundreds wildly scrambling for food thrown at them [as was the case last month in Croatia], but instead hundreds of "VIP guests" stepping on each other to snatch the best clothing item at an event organized for the retailer H&M x Balmain collaboration.

As international retailer H&M geared up to release its latest designer collaboration with French fashion design house Balmain on Wednesday, VIP shoppers lined up in front of the store in Istanbul's Zorlu Center to snag from this collection. But the afterwards footage resembled anything but "elite"-like event, as the shoppers frantically tried to grab any item in a chaotic scrum.

One of the shoppers, 37 year-old Melissa of doctor profession told the reporters that as the doors opened, screams and howling arose. She said after she fought her way through the crowd, she reached a section where she saw people toppling down a dummy and taking the clothes off it. "Because as clothing item, only the ones on the dummy were left," Melissa said.

"Suddenly the boxes on the floor caught my attention. After I brawled with the crowd who were also trying to jump on the boxes at the same time as me, I managed to cling to two boxes tight-knit."

Melissa said, she did not know what was inside the boxes but she still bought them. She said, "When I went outside, two boots came out [of the box]. One pair was size 36, and the other 39. I wear size 37, but I did not give them back."

"I had given such a fight! I would give them to friends who would want to wear them… There is so much demand anyway," Melissa said.

The shoppers' frenzy was described by CNN Türk reporter Duygu Demirdağ in a report on Wednesday, as Demirdağ was present at the scene. She saw a woman fall in that chaotic crowd and wanted to help get on her feet, but the woman thought Demirdağ was trying to "nick" the items she was holding as if she was a "Bengal tiger" and the clothing was her "cub", the CNN reporter described.

This was not the end of the scenes that shocked Demirdağ. She saw a woman running and swinging a dummy's leg at the same time. Demirdağ described this scene as: "The last time I saw such an expression [on the woman's face] was when the refugees were trying to pass the Hungary border."

One of those who "successfully" came out of their battle was the 59 year-old Fatih Ürek, a singer who often appears on television and in trendy bars of Istanbul. He told the reporters that he bought about seven or eight pieces of item, by spending approximately TL 3,000 ($1,044).

"Buying a coat for TL 1,000 which I knew as being sold for TL 40,000 before made me very happy," Ürek said. "When you actually think about it, this is not ill-mannered… In every part of the world, in such organizations, people go through similar experiences. This has nothing to do with money, I really had fun."