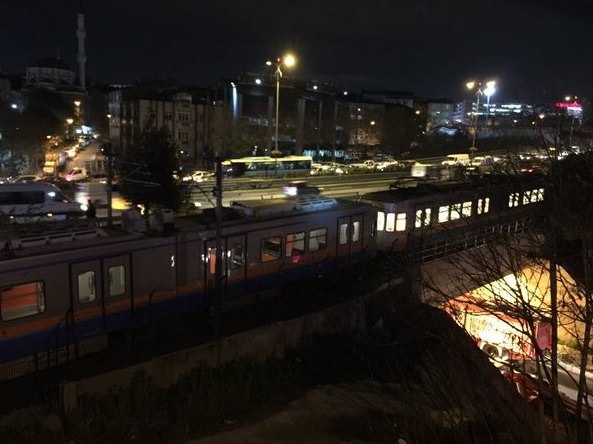 One person was slightly injured, the province's governor Vasip Şahin said. The injured man, Adnan Yalçın, 36, is in stable condition, according to hospital sources.

The Crime Scene Investigation squads confirmed that the blast occurred after a roadside bomb exploded. The police suspect the bomb was set for a riot police vehicle, which passed by just before the blast.

The explosion smashed the windows of metro train passing nearby the scene, leading to the evacuation of passengers. Istanbul Metropolitan Municipality stated that all metro and tram services have been temporarily suspended after the blast; however, services soon resumed throughout the city and with delays on the line where the explosion took place.

Photographs on social media showed what appeared to be dozens of people walking alongside overground train tracks after trains had been halted. Although Istanbul's metro is largely underground, it runs above ground in some places, including around Bayrampaşa.

It is still unknown who, or which group, planted the bomb. Istanbul police, backed by a helicopter, are currently searching for a suspect seen at the site. "We are evaluating all the possibilities," governor Şahin said.

"As the incident occurred in a crowded place, it appeared in the media as if it was a big explosion, but there are no victims, fortunately," he added.

Bayrampaşa Municipality Mayor Aydıner said a number of vehicles were damaged in the blast, including a bus and a car. Authorities deployed riot police with shields to secure the perimeter of the site in case of a second blast.

The blast was initially thought to be caused by transformer, and it was heard in many districts of Istanbul's European side. Many social media users claimed that they have heard the explosion from remote districts as far as Kadıköy on the Asian side. Several Turkish broadcasters reported from the scene that at least six were injured and one dead.

Turkey has been on high alert since more than 100 people were killed by two suicide bombers in the capital Ankara in October, three months after a similar attack left 33 dead in the southeastern district of Suruç near the Syrian border in July.
Last Update: Dec 02, 2015 11:51 am
RELATED TOPICS