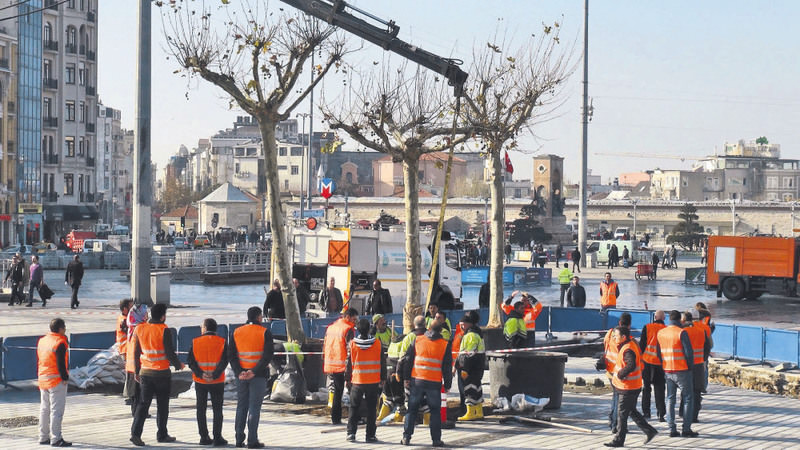 by Daily Sabah Dec 16, 2015 12:00 am
Istanbul's iconic Taksim Square will get a makeover with a project to close it to traffic and add more green spaces. Workers planted the first tree in a corner of the square on Monday, two years after an environmental protest against cutting down the trees in Gezi Park, adjacent to the square, erupted into violent riots.

The first out of 58 trees to dot the square was a plane tree planted in front of the Atatürk Culture Center, a historic building overlooking the square. Five other trees were planted on a corner of Gezi Park. Twenty more plane trees, 18 oak trees, 14 magnolia trees and five lime trees will soon join the lone tree.

Taksim Square was at the heart of violent riots in the summer of 2013 after an announcement of plans to rebuild an Ottoman-era garrison originally located in Gezi Park, a small park separated from the square by a set of stairs. Initially beginning as a protest to what environmental activists called plans to cull a few remaining trees in the park, rallies against redevelopment soon descended into riots exploited by terrorist groups, leading to deaths, injuries and property damage both in Istanbul and across the country in similar riots. Riots led to a delay in the project for a facelift of the square and after a lengthy legal process, a court finally approved new zoning plans to pave the way for the square's pedestrianization.
RELATED TOPICS