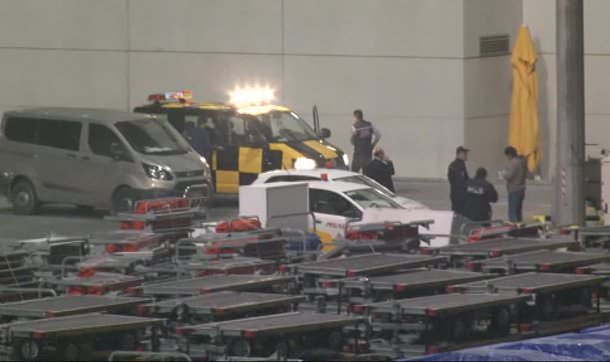 What caused a blast that killed one and injured another at Istanbul’s Sabiha Gökçen Airport early on Wednesday is still a mystery, while the explosion led to heightened security measures at the city’s airports

The cause of an explosion that occurred at Sabiha Gökçen Airport on Istanbul's Asian side was not revealed hours after it claimed one life and injured another early on Wednesday. Zehra Yamaç, 30, died at the hospital of head wounds, while Canan Çelik Burgucu sustained injuries to her hand due to the explosion.

The two women were cleaners at the airport in the city's Pendik district. They were cleaning an airplane of budget carrier Pegasus Airlines when the explosion happened on the tarmac, according to a statement by the company. The airplane was empty at the time of the attack around 2:00 a.m.

Five parked planes on the runway were also damaged in the explosion, which was initially blamed on a mortar attack by several media outlets. Security forces sealed off the site of the explosion and searched the airport and a wooded area next to the airport. Flights and ground services at the airport were not affected, while police wielding automatic rifles took strict security measures at the entrances of the airport. A police helicopter circled the airport for surveillance following the blast.

Transportation, Maritime Affairs and Communications Minister Binali Yıldırım told Anadolu Agency that the airport was not lacking in terms of security "in line with international standards." "The police immediately responded to the blast and isolated the area of explosion. Planes were lightly damaged. Flights were back to normal after the investigation of the scene, and there were no significant flight delays," Yıldırım said. Yıldırım added that it was too early to comment on the cause of the explosion, but assured the airport was secure with "every type of measure from security cameras to patrols."

"There was damage to five airplanes in total due to the impact of shrapnel. Weakness in the airport's security is out of the question. All international security standards are being implemented," Yıldırım further told reporters.

The British Embassy, meanwhile, was quick to warn its citizens about the blast. The blast was included in the travel advisory section of the embassy's website. Authorities elevated security measures at Istanbul Atatürk Airport, the city's largest, following the explosion. Police searched cars at a checkpoint at the entrance of the airport.

Musa Yamaç, husband of the woman killed by the explosion, said they had no idea how it happened. He said Zehra began working at the airport four months ago. "I want the culprits to be caught as soon as possible. Nobody told me anything about the cause of the explosion. I only want who caused this to be captured," he told reporters.

Sabiha Gökçen Airport is a hub of budget airlines though it also hosts flights of national carrier Turkish Airlines. It hosted more than 26 million passengers this year both for domestic and international flights.

The explosion came at a time of heightened security in the country, which faces multiple threats of terrorism from DAESH and the PKK. DAESH was blamed for twin blasts in the capital, Ankara, which killed 103 people at a rally in October. The PKK has also stepped up its campaign of violence, especially in southeastern Turkey since the summer, killing dozens of troops, police officers and civilians. Police had captured a suspected PKK member late Sunday as he attempted to plant a roadside bomb in Istanbul's Beykoz district. Along with the PKK, the Revolutionary People's Liberation Party-Front (DHKP-C) and similar ultra-left terrorist organizations are active in Turkey, though their attacks are confined to assassinations and minor bomb attacks.
Last Update: Dec 23, 2015 6:28 pm
RELATED TOPICS