Istanbul’s third bridge counts down to its opening this summer 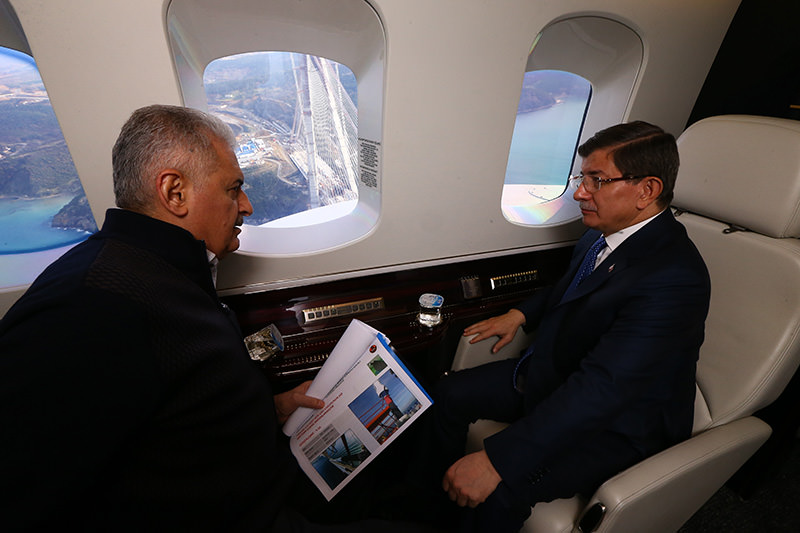 by daily sabah Jan 08, 2016 12:00 am
The Yavuz Sultan Selim Bridge, which will be the third bridge to span Istanbul's Bosporus, may be inaugurated this summer, Prime Minister Ahmet Davutoğlu said Friday after visiting the bridge – where the main construction work is almost completed.

The opening of the bridge was delayed several times last year due to technical problems, but Davutoğlu promised to inaugurate it in the summer "barring an extraordinary situation." "About 88 percent of the project is complete, and both the bridge and connecting roads will hopefully be opened as soon as possible," he said.

Thousands of employees and engineers work ceaselessly 24 hours a day on its construction. The total length of the bridge, whose construction started in 2013, is 2,164 meters.

The bridge, which has a length of 1,408 meters over water, has eight lanes of highway and two lanes of railway. It will be the longest suspension bridge in the world that features a rail system. The height of the tower in Garipçe village on Istanbul's European side is 322 meters and the other tower in the Poyrazköy district on the Asian side is 318 meters high. The bridge will be the highest in the world in terms of the height of its abutments.

The rail system that crosses the bridge will run from Edirne to İzmit, will be integrated into the Marmaray and Istanbul Metro and connect Istanbul Atatürk Airport, Sabiha Gökçen International Airport and the third airport.

During a press conference at the construction site, Davutoğlu assuaged the concerns of environmentalists on the potential environmental harms of the bridge, since it is located in areas with lush greenery. "We have every measure in place to keep those places green and maintain an ecological balance," he said, referring to concerns that the construction may affect the habitat of wild animals living in areas near the site. The government has already announced plans to build at least six wildlife crossings and a mass plantation of trees to replace the trees that were chopped down for the bridge's construction.
Last Update: Jan 08, 2016 5:22 pm
RELATED TOPICS