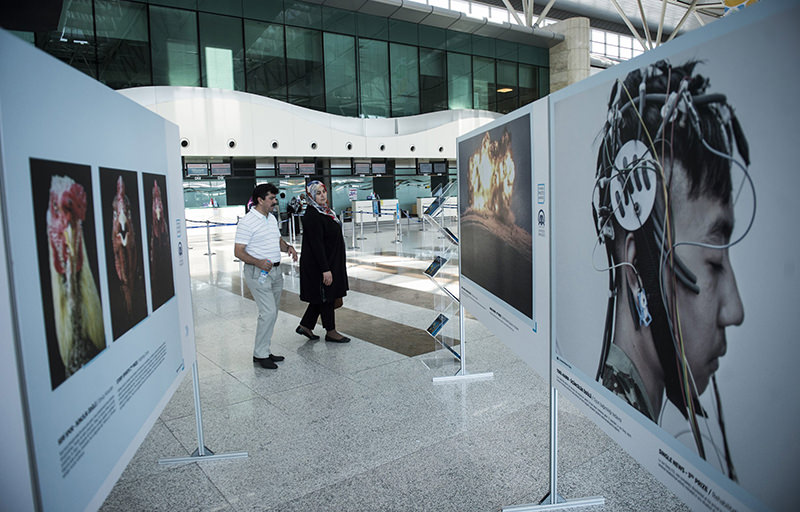 The winning photos of the 2014 u0130stanbul Photo Awards were displayed in Ankara Esenbou011fa Airport. (AA Photo)
by Anadolu Agency Jan 18, 2016 12:00 am
Members of the jury of the second "Istanbul Photo Awards" was announced Monday.

The second "Istanbul Photo Awards" -- the international news and sports contest organized by Anadolu Agency -- will take place in 2016.

Pulitzer laureate Daniel Berehulak joins this year's jury as the 2014 winner of the competition's "Photo of the Year" prize as well as Newsweek magazine photo editor James Wellford, director of photography at French newspaper Le Monde Nicolas Jimenez, and Laurent Van der Stockt, who has been awarded the Excellence-Journalism Prize from Columbia University.

The jury members are scheduled to come together in Istanbul in March to announce the winners of Turkey's only international news and sports photography contest.

They will determine the winner of "Photo of the Year 2015" prize and the winners in "News single", "News story", "Sports single", and "Sports story" category.

Last year's competition received around 12,000 applications from photographers based in more than 100 countries.

The outstanding images of 2014 have been published in the Istanbul Photo Awards 2014 book.

Daniel Berehulak's photograph on the Ebola epidemic in Liberia is the cover photo. Taken for The New York Times, the image captures the drama of the outbreak and was selected as photo of the year 2014.

The deadline for entries in the Istanbul Photo Awards is Jan. 31. A combined $58,000 in prize money are to be distributed to the first, second and third placed photographers in each of the four categories and to the winner of the photo of the year.