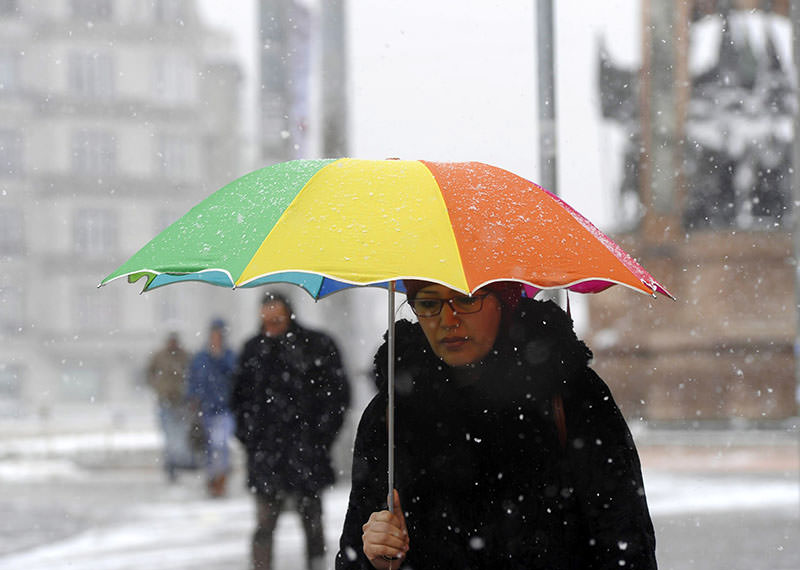 | IHA photo
by daily sabah Jan 18, 2016 12:00 am
Heavy snowfall made a comeback on Monday in Istanbul and northwestern Turkey after a couple weeks of relatively warmer weather. With temperatures dropping to zero degrees Celsius and below, daily life was affected in Turkey's most populated city. Hundreds of flights were cancelled on Sunday when the snowfall slowly started to take hold on the city as well as on Monday when it blanketed especially higher areas.

Schools were closed in the city due to snow storms, with land and sea traffic was also hit. Rush hour traffic was further paralyzed on Monday morning on the main roads that link the city.

However, Istanbul Governor Vasip Şahin announced late Monday via Twitter that schools would resume on Tuesday as the heavy snowfall that hit Istanbul is expected to subside by afternoon.

National flagship carrier Turkish Airlines (THY) and all other airliners announced the cancellation of more than 360 flights from the city's two airports, Istanbul Atatürk and Sabiha Gökçen, for Sunday and Monday. Further cancellations are expected as weather forecasts show adverse weather conditions for flights. Ferry services connecting Istanbul to western Turkey via Bursa, a northwestern city south of Istanbul, were also cancelled because of snowstorms.

The snowfall was not as severe as it was two weeks ago, but road crews were nevertheless deployed on the main roads across the city to keep them clear of snow and ice. The Istanbul Metropolitan Municipality said more than 5,000 crew members were working along with hundreds of snowplows to keep Istanbul's streets free of snow and ice. The city's metrobus service – the only reliable means of mass transit during inclement weather – also remained open despite the snowfall, which had disrupted its services in the past. Authorities warned residents to use the city's mass transit system instead of cars to limit the traffic in the city, which is already named one of the worst in the world.

Weather forecasts show no precipitation for Wednesday but temperatures will remain low at 4 Celsius degrees at most for Istanbul but snowfall is expected to return Thursday.
Last Update: Jan 18, 2016 9:38 pm
RELATED TOPICS