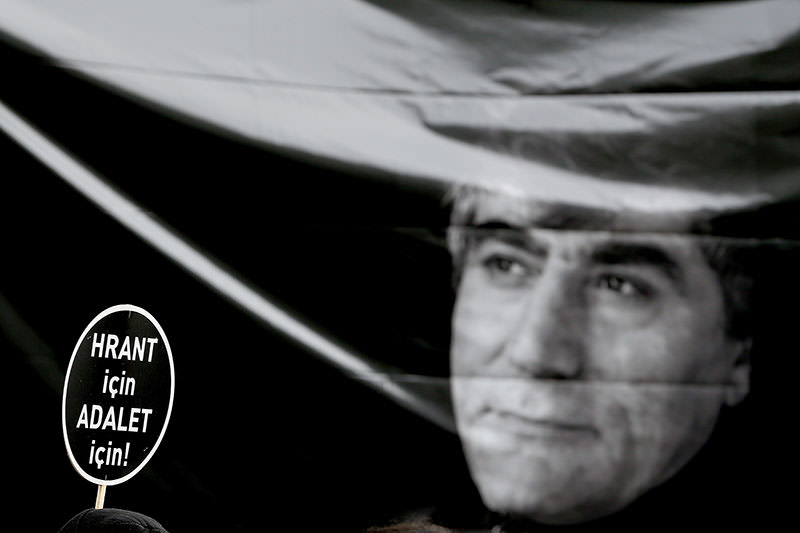 As the investigation into his murder continues, prominent Turkish-Armenian journalist Hrant Dink was remembered on Tuesday on the ninth anniversary of his death in Istanbul, by a large crowd of friends and supporters calling for the real culprits in the murder of Dink

Hrant Dink, the Turkish-Armenian journalist killed in 2007, was commemorated on the anniversary of his death on Tuesday, by a crowd who convened outside the Agos daily, where he served as editor-in-chief.

Waving banners reading "We are here, ahparig!" (roughly translated as "brother" in Armenian), the mourners renewed calls for a further inquiry into those who masterminded his murder. A teenager with far-right links was captured and subsequently convicted for Dink's murder, but the investigation into his death was muddled with allegations of cover-up and suspicion of the involvement of the controversial Gülen Movement.

Though the assassin and two others who helped him were convicted and imprisoned, activists claim there was a larger organization scheming for his murder. Subsequent criminal inquiries indeed found negligence and wrongdoings for the part of police and public officials, but the investigation into the murder is still not concluded.

53-year-old Hrant Dink was walking into the offices of his Turkish & Armenian bilingual daily Agos when a young man, later identified as Ogün Samast, approached him and fired three shots. Dink died of his wounds and his murder sparked a public outrage in Turkey, considered murdered for his ethnic identity and outspoken editorials. A Turkish Armenian, Hrant Dink was at the forefront of efforts for reconciliation between Turks and Armenians, who have been at odds over the alleged genocide of hundreds of thousands of Armenians during the World War One by Ottoman forces.

Dink was known for his criticism of both sides of the debate but ultimately drew the ire of ultranationalists. Though he complained of death threats before his murder, it was later claimed that Ogün Samast was "brainwashed" by a police informant to commit the murder, according to media reports.

At the time of his death, Dink was facing several lawsuits for "denigrating Turkishness," an act constitutionally punishable by prison terms, for his articles and editorials on the mass deaths of Armenians in 1915. The deaths are not officially recognized as genocide – as Armenia describes it – by Turkey, although widespread deaths during the forced deportation of the Armenian community from Ottoman territories are acknowledged.
The informant and other accomplices of Samast were later arrested, but an inquiry found several police intelligence officials were aware of a plot to kill Dink by Samast and others but had deliberately ignored it.

Former police chiefs linked to the shady Gülen Movement, which already faces terror charges, were detained for covering up the intelligence on the murder. Prosecutors linked to the same movement also reportedly dragged down the murder investigation. Prosecutors on the case have constantly changed in the past and Gökalp Kökçü was the latest prosecutor to be assigned to the case. Kökçü was reassigned to another post earlier this month, though he deepened the investigation into the role of Gülenists in the murder.

Amid tight security measures on Tuesday, a crowd converged in Istanbul and marched to the headquarters of Agos, where a ceremony was held at the spot where Dink was shot. The crowd shouted a slogan common to ceremonies for Dink, "We are all Hrant, we are all Armenians," and laid red carnations on the spot. After a solemn vigil against the backdrop of a large poster of the late journalist, activists attending the ceremony made speeches.