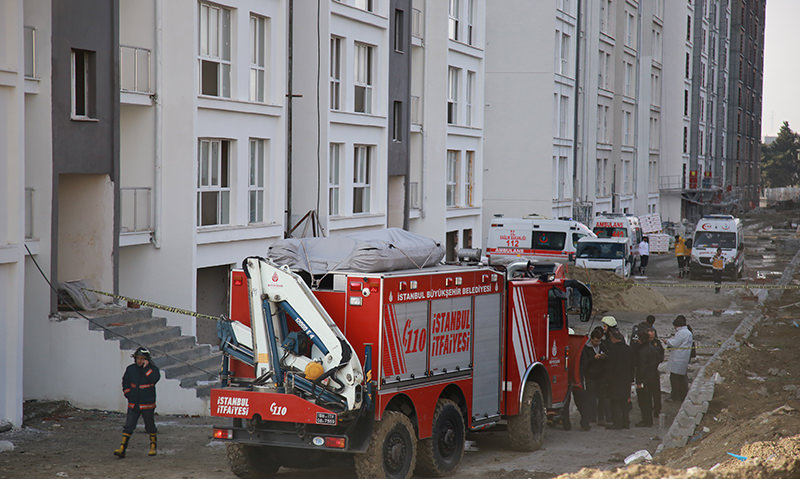 | AA Photo
by Daily Sabah Feb 01, 2016 12:00 am
Three workers were killed when a freight lift crashed to the ground from the 23rd floor of an apartment building under construction in Istanbul on Monday.

Workers were at a 32-story building in Bahçeşehir, a district on Istanbul's European side, when the lift crashed for an unknown reason. Media reports said the three victims were riding the lift, despite it being against work safety, to travel on the platform originally used to haul construction materials. Police launched an investigation into the incident. One of the construction workers was reported to be under 18 years of age.

The safety record of construction sites in Istanbul, where a construction boom is underway, has long been a source of debate, especially two years ago when another elevator crash killed 10 workers in the city's Mecidiyeköy district. An investigation found the elevator was faulty and four people were arrested on charges of involuntary manslaughter, including the elevator technicians responsible for its maintenance.

Though mining still tops the list of the most dangerous sectors, the construction sector, which has seen growth in recent years, has had its share of work-related deaths. The significant growth in the sector has boosted the employment of construction workers, from 1.2 to 1.9 million in six years. Statistics show that 1,754 workers were killed from 2009 to 2014 at construction sites and another 1,940 were rendered disabled in 35,846 accidents, according to unofficial figures. The occurrence of accidents at construction sites has dropped to slightly over 62,000 in 2010 from 72,963 in 2008. Yet, it topped 74,000 in 2012, the last year the data was collected. Anadolu Agency says 1,025 people died in work-related accidents between January and October 2015.

Officials say that although work safety is regularly inspected, companies act negligently in ensuring the safety and often cut the costs of safety measures.