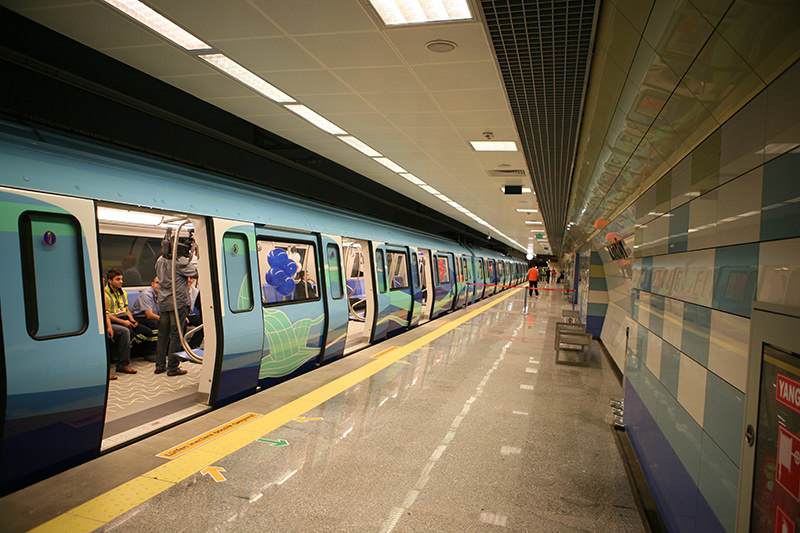 Photo shows the Kadu0131ku00f6y-Kartal metro line in Istanbul. (FILE Photo)
by Daily Sabah Feb 09, 2016 12:00 am
The driverless automated metro line, scheduled to come into service by the end of 2016 in Istanbul, will become a Turkey first of its kind.

The Üsküdar-Ümraniye-Çekmeköy-Sancaktepe line will be the second metro line on the Anatolian side of Istanbul and will mark another first by incorporating 'automated platform gates'.

The automated platform gates are chest-height sliding doors that prevent passengers from falling off the platform edge onto the railway tracks. These platform gates slide open and close simultaneously with the train's doors.

Announcing the news on Tuesday, the Istanbul Metropolitan Municipality stated that the travel time between the Üsküdar and Sancaktepe districts will be decreased to 24 minutes.

As the metro will have no driver, passengers will be able to sit in driver's compartment and watch the train's journey throughout the 2,750 meter-long tunel.

The station and wagons will be under 24-hour surveillance.

The driverless metro line will be able to reach speeds up to 90 kilometers per hour and will be operated from a command center that will see the operation of the 16-station line covering 20 kilometers.

The Üsküdar-Sancaktepe metro line's construction is continuing 24 hours non-stop, with 2,430 personnel working to complete 11 stations in the first stage.

When the construction is finished passengers will be able to travel from Çekmeköy-Sancaktepe to Üsküdar in 24, to Kartal in 59, Yenikapı in 36, Taksim in 44, Hacıosman in 68, the Atatürk International Airport in 68 and the Olympic Stadium in 78 minutes.