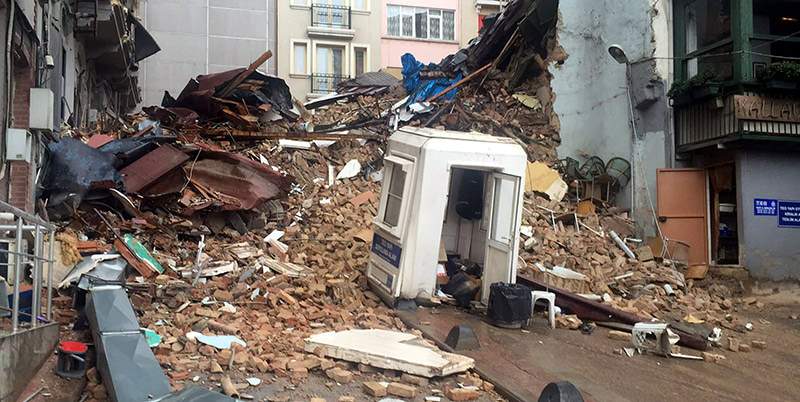 | AA Photo
by Daily Sabah with Agencies Feb 12, 2016 12:00 am
Two five-story buildings collapsed in Istanbul's historic Beyoğlu district on Friday, with a number of people feared to be trapped in the rubble it was later confirmed that nobody was harmed.

The collapse at around 2 p.m. local time (1200GMT) left a large pile of rubble in a street close to Istiklal Avenue, the main pedestrianized shopping thoroughfare that leads to Taksim Square.

A cafeteria was located at the entrance of the buildings although it was not known if anyone was inside at the time of collapse.

Istanbul Governor Vasip Şahin said nobody was inside either building when they fell amid a cloud of dust. He said further searches would be carried out and an investigation would be launched.

Nearby car park attendants warned bystanders to run when the felt the buildings -- a hotel and a warehouse -- shake, preventing a major disaster Beyoğlu Mayor Ahmet Misbah Demircan said.

Nearby buildings were later evacuated, he added.

Şahin told reporters at the scene that only one resident was in the hotel and escaped unharmed.