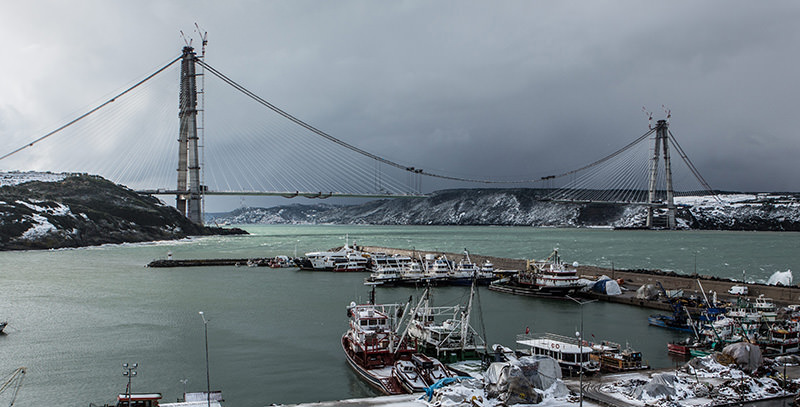 According to Transport, Maritime Affairs and Communications Minister Binali Yıldırım, the first section of the third Istanbul airport will be completed by February 2018 and Istanbul’s third bridge will be ready in August

Speaking to Anadolu Agency (AA) about the third Istanbul airport, Transport, Maritime Affairs and Communications Minister Binali Yıldırım said: "When all the stages are complete, nearly 10.247 billion euros will have been spent. In February 2018, we will open the first section, which will have the capacity to accommodate 90 million passengers per year. Therefore, all the problems we have with Istanbul Atatürk Airport will be solved. Furthermore, Yildirim said Istanbul's third bridge will open in August.

Stressing that they have not yet specified the route of the Channel Istanbul megaproject, Yildirim said: "By the second half of 2016, all the problems related to the Channel Istanbul route will be solved." He also discussed some topics in the agenda, and said small-scale legal regulations are planned for the project. "This project will be completed, but we have not yet specified its route. Everyone is fortunetelling, having lucid dreams and saying, 'This is where the channel route will pass through.' All we want is to avert these speculations," Yıldırım added.

According to Yıldırım, works are in progress on five different routes. "Soon, one of them will come to the forefront as the route of the project when the necessary site evaluations are completed. As of the second half of 2016, all of the problems will be solved," Yıldırım said.
Although the site evaluations are ongoing, he commented on how the project will be contracted. "One of the alternatives is to construct it ourselves by providing funding while the other is through a public-private partnership. We are currently working on both of them. The most important thing is to provide quick funding and complete it without any technical difficulties. We plan to finish the project in four-to-five years, and it is one of our target projects for 2023. There is hopefully a chance to finish it earlier as well, pending everything goes smoothly," Yıldırım said.

Regarding the bridge planned to be constructed over the Gallipoli Strait, he said: "We have a saying that 'Gallipoli is impenetrable.' However, that is only applicable to enemies, not friends. The works are in progress; everything will be sorted out by the end of 2016, and then we will give the go-ahead to begin construction," Yıldırım said.

Yıldırım said when the bridge is constructed, the traffic from Europe to the Aegean and Mediterranean regions will be routed not via Istanbul but via Edirne following the route through Çanakkale, Balıkesir, İzmir and Aydın. Exporting industrial products to Europe will be easier as well. "The government is currently considering whether a rail system should be constructed on the bridge as well. We will decide later after calculating the pros and cons," Yıldırım said.

Stressing that there are many financing mechanisms to draw on, he said: "I do not think that we will have financial difficulties as long as we produce comprehensive and attractive projects." According to Yıldırım, access to financial sources has become more difficult in Turkey in comparison to other countries, but public-private partnerships are still attractive in terms of external financing; therefore, megaprojects will not be negatively affected.
Last Update: Feb 24, 2016 8:52 pm
RELATED TOPICS