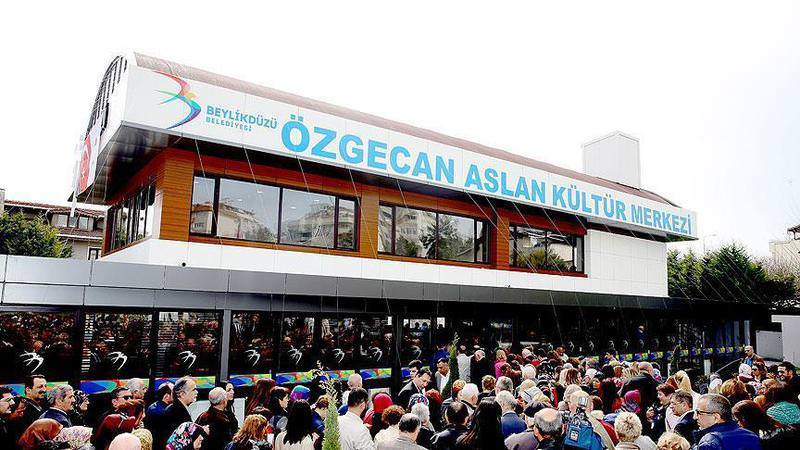 by Anadolu Agency Mar 08, 2016 12:00 am
A local municipality in Istanbul on Tuesday dedicated a cultural centre to a young woman brutally murdered last year in a case that highlighted violence against women in Turkey.

Twenty-year-old Özgecan Aslan was beaten and stabbed to death as she tried to fight off a minibus driver after he attempted to rape her in Mersin, southern Turkey, in February last year. The crime - for which the driver and two others were given aggravated life sentences - sparked nationwide protests.

A crowd of over 300 including Özgecan's father Mehmet attended the opening of the Özgecan Aslan Cultural Center in the northeastern Istanbul suburb of Beylikdüzü.

"At these kind of events there is not only one feeling," he told Anadolu Agency.

"[I feel] both pain and sadness, joy and longing, I feel all those feelings at the same time."

Aslan, who worn a photograph of his daughter on his lapel, said hundreds of others had been affected by his daughter's murder and hoped some good would come from her death.

"I wish she was alive and we were not naming this center after her," Imamoglu said. "But unfortunately, Turkey has been experiencing all those [kind of things]."

In the months following Özgecan's killing, the Ozgecanlar Association was set up to raise awareness of violence against women in Turkey, where, according to the We Will Stop Femicides Platform, more than 300 women were killed last year.

The center, which will host cultural events and vocational courses, contains a library and sports hall and has a window with a picture of Özgecan imprinted on it.

According to the UN, one-in-three women around the world suffer from violence, mostly at the hands of a spouse or family member.
Last Update: Mar 08, 2016 6:30 pm
RELATED TOPICS