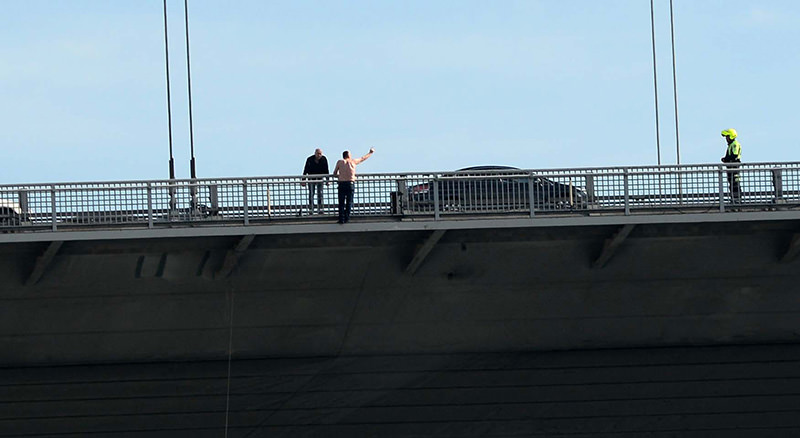 | DHA photo
by Daily Sabah Mar 09, 2016 12:00 am
An Istanbul court authorized the release of two women who reportedly shouted "jump" to a suicidal man clinging to the rails of Istanbul's Bosporus Bridge. The women, now under judicial control, were detained on Tuesday after the suicidal man jumped to his death.

The women, identified by their initials as 49-year-old H.U. and 27-year-old M.Ö., appeared on Wednesday in the Istanbul court, based on charges of "encouraging suicide," an offense carrying a prison term of up to five years.

Media reports said the two women were in a car passing by the spot where Erol Çetin, a man with family problems, was negotiating with police officers as they tried to convince him to climb back to the bridge as he clung to the rails.

The women, angered by the traffic jam caused by the police presence, swore at Çetin and said, "We have been waiting in traffic for hours because of you. Jump already!" eyewitnesses said. Moments later, Çetin leaped into the waters of the Bosporus. Officers at the scene detained the two women while search and rescue crews recovered Çetin's body from the sea.

The two suspects, who were interrogated by prosecutors, denied the charges while the prosecutor's office asked an Istanbul court for their arrests.

The court decided for the women's release under judicial control on Wednesday.