Publishing houses to translate 150 books of Turkish authors to Arabic 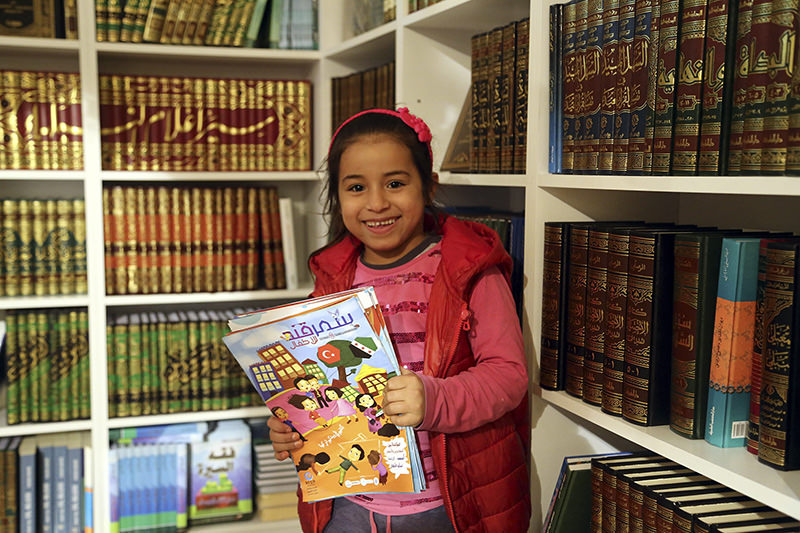 Photo dated Feb. 20, 2016 shows a Syrian refugee child holding a magazine at the Arabic Book Fair 2016 in Istanbul.
by Daily Sabah Mar 09, 2016 12:00 am
Arabic publishing houses which came to Turkey to visit the CNR Book Fair from March 4th to the 13th in Istanbul, have signed copyright agreements with Turkish publishing houses to translate 150 books, including children's books, of various Turkish authors to Arabic, according to a report published by Anadolu Agency.

The Arabic and Turkish publishing houses signed the agreements on Tuesday in an organization which Istanbul Governor Vasip Şahin also attended. Şahin thanked everyone who contributed to the book fair and especially the Arab Publishers Association in his speech. The governor said that the CNR Book Fair, of which third is being held this year, has turned into an organization connecting the Middle East, Far East and Turkey.

Turkey's Publishing Association President Alparslan Durmuş gave a speech at the event, during which he named the signed agreements between Turkish and Arabic publishing houses as "the first bridge established between Turkey and Arab regions."

85 publishing houses from the nine countries of Palestine, Lebanon, Egypt, Syria, Saudi Arabia, Tunisia, Jordan, Yemen, and U.A.E. have joined the fair where they were represented at the "Arabic Countries Publishers Special Section," Durmuş also said.

Some of the authors will be translated to Arabic for the first time.