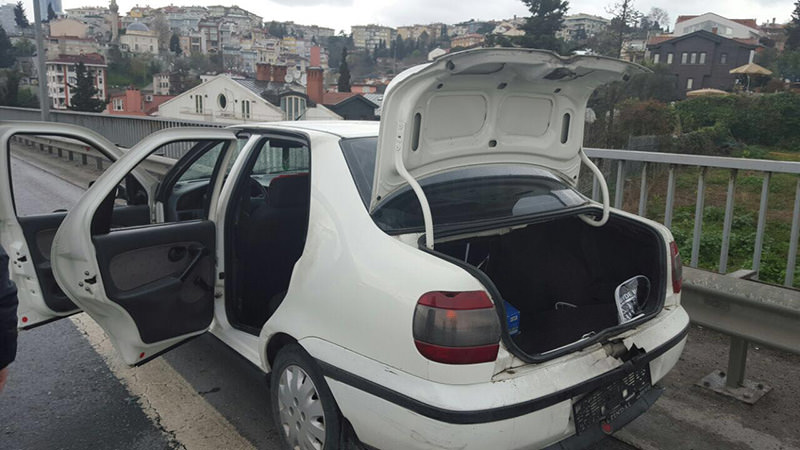 An unattended vehicle on Istanbul's busy Bosporus Bridge on Tuesday afternoon renewed fears of a car bomb attack in Turkey's most populated city just two days after a bombing incident killed more than 35 in Turkish capital Ankara. Bomb-disposal squads rushed to the scene, a key transit route connecting Asia and Europe, only to find there were no explosives in the vehicle parked on the roadside at the entrance of the bridge on the European side. The truth was revealed a few minutes later: Turkish media outlets reported that the car's driver had abandoned his car after he ran out of fuel while on the bridge. The car was towed away, while the bridge which was closed to traffic was reopened shortly before the rush hour, when hundreds of thousands of commuters travel home between two continents. Police are now looking for the driver, who was caught on security camera footage getting into another car after abandoning his white sedan bearing a license plate from Tekirdağ, a city west of Istanbul.

Turkey is on alert after the bombing in Ankara which claimed the lives of civilians waiting at a bus stop in a park in Kızılay, a central district of the capital situated near government buildings. The PKK terrorist organization has been blamed for the attack, the third to hit Ankara in five months after another attack by the PKK killed 28 in February, a few months after the twin suicide bombings carried out by DAESH terrorists killed 102 at a train station.

The most recent major terror attack in Istanbul was in Sultanahmet Square in January, in which 12 German tourists were killed. A suicide bomber linked to DAESH blew himself up at the square. Istanbul was also scene of an attack targeting riot police earlier this month, by two militants from the Revolutionary People's Liberation Party-Front (DHKP-C). The two terrorists were killed after the non-fatal attack in the city's Bayrampaşa district.