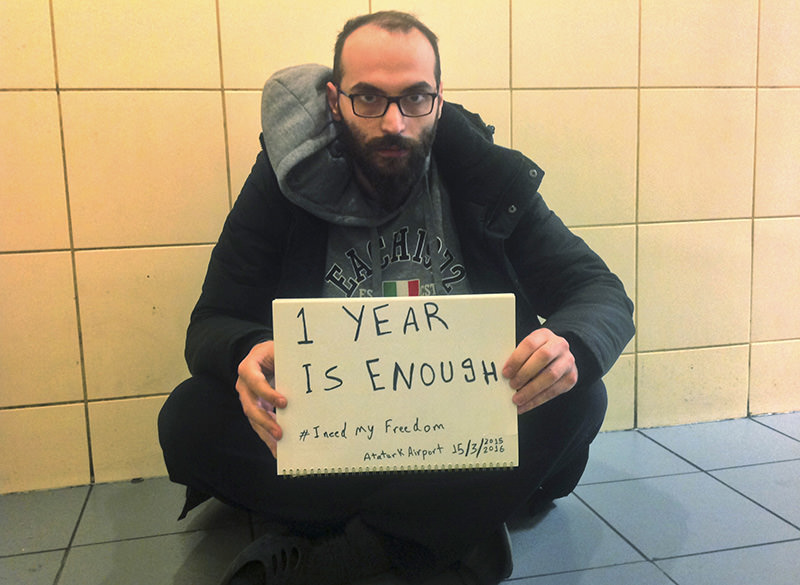 27-year-old Fadi Mansour has been living in the airport since March 15, 2015, following his flight from the war-torn country in 2012 and subsequent journey.

Mansour was granted the permission by the Directorate General of Migration Management to enter Turkey and reside in Adana repatriation center until the lawsuit he filed against Turkish authorities that denied his entry for fake documentation is terminated.

Mansour's case was recently brought to spotlight by the Amnesty International as he was completing a year of residence at the airport. During that period, Mansour lived in a room with no natural light or beds called the "Problematic Passengers Room" at Atatürk Airport.

For Mansour, it all started in 2012 when he fled from Syria to Lebanon to avoid military service as a conscientious objector. He was in the fourth year of his law studies when he had to leave. In Lebanon, he was kept hostage for ransom by a local group for months, and arrived in Turkey in 2014. After spending a month, he decided to go to Malaysia but his entrance to the country was denied for using fake ID information. He arrived in Turkey on March 2015, and spent eight months at the airport waiting for his entrance to Turkey to be approved, until he was attacked by another person in the "Problematic Passengers Room." Mansour then decided to return to Lebanon and flew there on Nov. 20, 2015, but he was also denied entrance there, and upon his return to Turkey again in Nov. 2015, he was taken into custody, where he has remained ever since.

Mansour had to cope with the difficulties of living in the airport for a year. He told that during that period, he mainly ate sandwiches distributed to him and his roommates, about 30 to 40 strangers, he slept on benches and sofas and was only allowed from time to time to walk in the shopping areas of the airport. All these led him to think of returning to Syria after all is not a bad idea.

"At least, you only die once in Syria, it is better than dying every day here," he said.

Maintaining its open door policy since the beginning of the war, Turkey currently hosts 2.7 million refugees inside its borders, only of which some 280,000 reside in refugee camps, while the remaining population is being dispersed around the country. Mansour's case remains one of the few exceptions as Turkey has initiated simplified border procedures to facilitate the entrances of Syrian refugees, provided them with ID's, free health and education services.

Mansour's case reminded the story of Mehran Karimi Nasseri, who spent 18 years in Paris' Charles De Gaulle Airport following the Iranian Revolution in 1979, which set the basis for the 2004 movie "The Terminal" starring Tom Hanks.