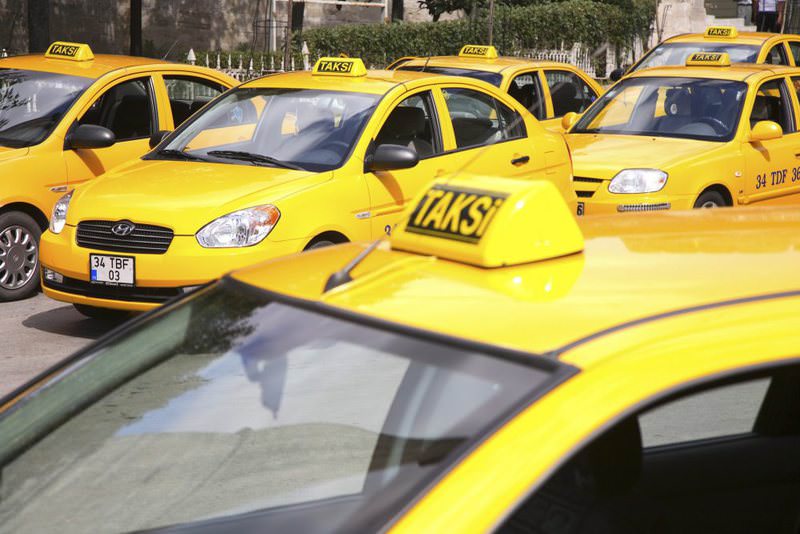 Although taxis offer a comfortable ride in Istanbul compared to the overcrowded buses, tourists often complain of fraud attempts by drivers.
by Zeynel Yaman Mar 23, 2016 12:00 am

Authorities have stepped up measures to clamp down on Istanbul taxi drivers who face tourist complaints of overcharging, with officers disguised as tourists beginning inspections of drivers in the city

Taking a taxi is one of the easiest ways to get around Istanbul, especially for tourists. Taxis are also a source of problems for customers, especially foreign tourists who claim some drivers overcharge them.

Following an increase in complaints, the police and the local tourism authority have stepped up measures against drivers involved in scams.

Police officers and tourism authority officials disguised as foreign tourists inspect the drivers three days a week, looking for scams. Drivers who have been found charging extra fees, keeping taxi fare calculators in every vehicle closed in order to hide the real fares and overcharging, and those deliberately taking long routes to destinations to charge more, are subject to fines of TL 400 ($139) and up.

The city is especially popular among tourists for its historic landmarks and bustling urban center, and last year it saw a record number of foreign visitors at 11.8 million. Though the city has a mass transit network in historical districts popular with tourists, taxis offer a faster ride and private trips, unlike the overcrowded buses, trams and subway services.

Complaints against taxi drivers are especially focused on the Fatih district, where landmarks such as the Blue Mosque, Topkapı Palace and Hagia Sophia are located. A consumers' non-profit organization has announced they have received complaints from Turkish customers, claiming drivers were preferring well-off tourists instead of locals and rejecting local passengers requesting short distance trips. Complaints escalate in peak tourism season in the summer, when tourists flock to Istanbul. Though laws and regulations are in place, some drivers, often those not licensed with local taxi drivers' associations, reject Turkish customers paying lower fares due to short distances, say the Federation Union of Consumers, citing complaints.

Taxi drivers swindling customers are currently subject to fines, but a landmark case may bring heavier sentences. An Istanbul taxi driver faces five years in prison for fraud over a 2014 case. A tourist from Ukraine accused an unidentified driver of charging her TL 190 on a route where the average fare is TL 40 at most. The driver is also accused of stealing money, after he claimed the tourist paid him only one dollar by changing $100 the tourist handed to him by a sleight of hand and received another $100. Though the driver confessed to his crime and returned the money, prosecutors asked the driver to be sentenced to up to five years for fraud. The case remains subject to appeal.

Though inspections are frequent, experts offer a few quick tips to prevent being ripped off by unscrupulous drivers. These include keeping an eye on the taxi fare calculator, located either behind the shift stick or digital meters placed on the rear view mirror. All taxis are required to have a fare calculator, and those not having one are unlicensed or "pirate," as they are called in Turkey. Authorities have recently removed the old difference between day and night rates, and fixed fares were determined regardless of time of day, although some drivers are still reported as charging extra for nighttime rides. Experts also urge tourists to keep a city map handy, in case of drivers taking a longer route than necessary to overcharge unsuspecting customers.The Istanbul Municipality plans to launch a taxi integration network project in the near future that will help to secure passengers and take measures against potential scams. All taxis will have a navigation system to ensure passengers that they are not being cheated by providing route information in several languages. The integration project will also expand the use of credit cards in Istanbul taxis.

Istanbul is also home to several smartphone apps for hailing a cab. One such app allows customers to quickly connect with a nearby cab and calculate the average fare for their destination, as well as offering a road map to help tourists learn how much they are supposed to pay.