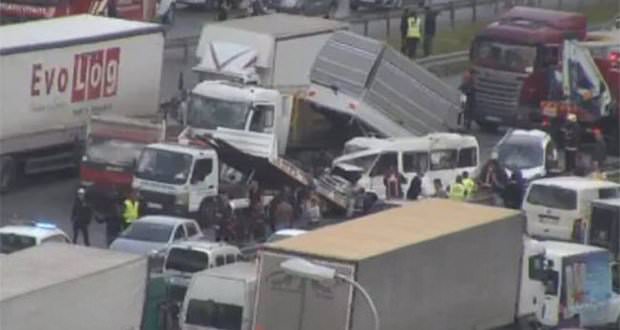 by Daily Sabah with AA Apr 12, 2016 12:00 am
Traffic on Istanbul's Trans-European Motorway (TEM) was redirected on late Tuesday after a 13 car pileup wreaked havoc in the Edirne direction.

One person died from injuries suffered in the multi-vehicle pileup, while four others were injured in the accident.

Scores of ambulances were dispatched to the scene and those injured were taken to hospitals in the nearby area.

The accident took place at 4 p.m. local time [1500 GMT] in the Bağcılar district of Istanbul's European side, according to a municipality traffic control center.

The accident involved multiple sedans and trucks, with police officials stating they are still investigating the cause.

European direction of the TEM has been locked due to the accident.