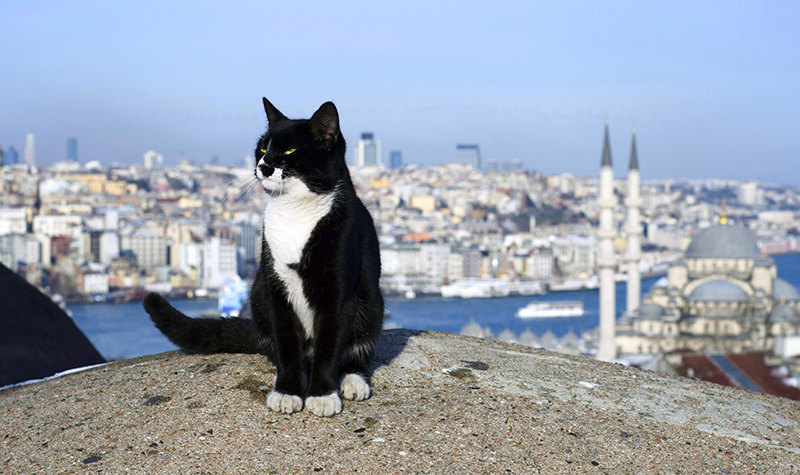 Many animals, losing their natural environment in the ever-growing city of Istanbul, have to lead poor and miserable lives on the streets, sometimes also suffering from cruel treatment.

Life on the streets is hard and brutal for strays - the abandoned animals that cannot survive without the help of humans.

The estimated number of strays - cats and dogs together - in the 15-million-strong city is around 250,000, Istanbul Metropolitan Municipality's Veterinary Services Directorate says.

The real number is a lot more according to the Istanbul Chamber of Veterinary Surgeons. Dogs alone number around 300,000 and cats-an icon of Istanbul-are over 700,000.

Head of the Chamber, Professor Murat Arslan, says the number has been increasing each day despite all the work in the field.

He warns that a she-dog can give birth to thousands of puppies in six years.

"The rise in their number may result in some negative outcomes. Some people are quite disturbed, as strays are getting more involved in daily life in order to find food, while others are quite happy feeding and protecting them. As a result, neighbors start to have quarrels over the strays.

"Noise pollution is among the complaints," Arslan says. "However, a number of animal-lovers are also complaining that strays should be better looked after by the municipalities."

He says the problem cannot be solved by the local governments alone and suggests "serious work in cooperation with the state authorities, associations, and veterinary surgeons."

Authorities from local governments and from the country's Agriculture and Livestock Ministry as well as vets and experts discussed the problems of stray animals and offered solutions.

"One of the main problems is that the owners are leaving their animals on the streets for some reason," says head of the directorate, Muhammet Nuri Coşkun.

"People should know that owning an animal is a significant responsibility," Coşkun stresses.

For some, strays are just a nuisance that cause illness and harm to the community; however they are beloved companion animals for others including Reyyan Kaçar, a 12-year-old primary school student in Istanbul.

She has two cats at home, "but hundreds of others on the street."

For several years, she has been putting food on the doorstep of their apartment every day so that the stray animals can find something to eat.

Having the support of her family in feeding and helping the stray animals around the neighborhood, she says "there are also animal-hating residents who are preventing me from putting a cup of water for them".

"I still continue to do it; because I want to see them happy, healthy and loved," she says.

However, around one million other stray animals in the city are not so lucky.

Hundreds of wounded, weak and sick strays, and the dead ones on the main streets haunts all, says Professor Arslan.

He thinks that long-term projects and strategies should be determined for real solutions.

The first legal regulation in Turkey over animal rights came over 10 years ago. The country adopted in 2004 the Animal Protection Law in line with the European Convention for the Protection of Pet Animals.

The law says it is the local governments' responsibility to care of the rehabilitation of stray animals.

In 2015, the Agriculture and Livestock Ministry provided the local governments with 4.5 million Turkish liras ($1.58 million) of subsidies for the needs of stray animals.

Istanbul has six temporary 'stray animal care facilities' - with a capacity of over 7,500 strays - where they are provided with nourishment and treatment.

They are also neutured and registered before they are owned. Last year, over 20,000 strays were neutered and nearly 1,000 of them found a home.

However, thousands of others had to be left to the places where they were first found.

"The number of abandoned animals will decrease as more strays are neutered," says Coşkun from the Municipality's Veterinary Services Directorate.

He says "trap-neuter-return" technique "is the best way for both human and animal benefit, as well as the environment."

Zekiye Köklü, head of the Ankara-based Animal Rescue Association, agrees with him.

"The neutered animal will be less stressful as it will not have to fight to find a couple or food for her [young]. In this way, there will also be less reports of animal bites."

Köklü, however, claims that the implementation of the "trap-neuter-return" technique is far from being correct and effective in Turkey.

Her association hosts hundreds of dogs and cats, looking after them until they find a permanent home.

"I can't imagine a street without the cats," says another stray animal lover who is living in Istanbul's Kadıköy district - which is also dubbed by some "Kediköy" (cat village) because of people's love for felines.

Dr. Zeki Zeren Street is famous for its two cats who always walk around together like buddies.

The two cats, as well as some 30 others on that single street, are regularly fed and loved by the residents.

However, there are also some "problem people who can even call the police to complain about animal-lovers' feeding the strays," one resident deplores.

"We do not have to love them, but we have to respect their lives. We are - human, or cats and dogs, or roses and daisies - just sharing the same environment," he says.

"One day, the greatest danger about stray animals will be when we see no dogs and cats on the streets."