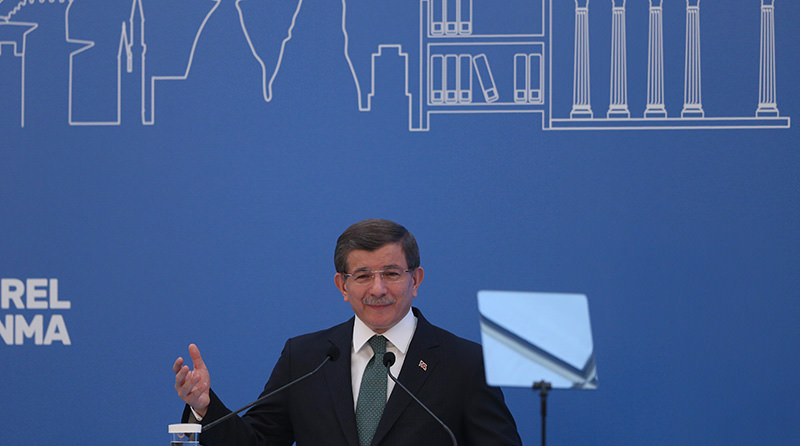 The government unveiled a new program Thursday aiming to boost support for culture and the arts with large modern libraries and more funds for artists and exhibitions, with Prime Minister Ahmet Davutoğlu saying he has envisioned a new square for Istanbul and changes at the Atatürk Cultural Center in Istanbul’s Taksim Square, whose fate provoked debate and riots

Prime Minister Ahmet Davutoğlu rolled out the Justice and Development Party (AK Party) government's new cultural program Thursday at a press conference attended by ministers and artists in Ankara. The new program promises modern libraries for many Turkish cities, new museums and more funds to support private artistic and cultural enterprises. But it was Davutoğlu's remarks on the sidelines of the conference that garnered the most attention. "Istanbul needs a beautiful square," the prime minister said as he was speaking about Taksim, the world-renowned square in Turkey's most populated city. He also hinted at the fate of the Atatürk Cultural Center, a large complex overlooking Taksim Square.

Built in the 1960s, the building resembles the colossal and simple architecture of the former Soviet Union and was at the center of the 2013 Gezi Park riots. The government's pledge to demolish the building and replace it with a modern opera hall faced strict opposition from rioters who went on to heavily vandalize Taksim Square and attack police officers with stones they removed from the pavement in the square.

Davutoğlu said the debate over the Atatürk Cultural Center should not be an ideological conflict or a reflection of political division. According to the prime minister, the fate of the building should be discussed openly without any prejudice and a decision should be made whether to restore it to its original form or to build "a big arts center that suits Istanbul's needs" in its place. He said Taksim Square and its perimeters have been an important part of modern Turkey but that the square does not have the characteristics to be described as one of the best squares in the world. We should talk, discuss and assess, without prejudice, on the need for beautiful squares for Istanbul," Davutoğlu said. He says that the AK Party is open to any ideas for Taksim Square.

Though the square and the cultural center dominated the event, the government's Cultural Development Program also offers much more to the city of Istanbul, its residents and artists, in terms of governmental support.

Every one of Turkey's 81 provinces will have at least one theater stage, with private-run theater companies being supported by incentives totalling TL 900. The government will double its support for those companies from TL 4.5 million in 2015 to TL 9 million this year.

As part of the cultural action plan, the government will inaugurate 18 new museums this year. The government will also build two "culture complexes" in Istanbul and in the capital city of Ankara. Davutoğlu referred to these buildings as "landmarks," house museums and other culture and arts venues. The complex in Ankara will be located in the Atatürk Cultural Center in Ankara, which has been the scene of military parades on national holidays in the past and will include a museum of fine arts, one of archaeology and a library, park and a general purpose hall. The complex in Istanbul will be built in Hasdal, former military headquarters.

Another now-defunct military barracks, one of the largest in Istanbul, will be restored and serve as a library with a capacity of 10 million books - "the largest in Turkey" - according to the prime minister. The project is scheduled to be wrapped up by 2018.

The government also pledged landmark changes for libraries as part of the "Living Libraries" project. Instead of simply being a place where books are stored and offered for reading, libraries will become social spaces, complete with cafes, small cinemas and venues for other social and cultural activities. Starting in May, the government will launch a Digital Culture project for the digital preservation of cultural heritage ranging from folk songs to books and pieces of art. New and larger libraries will be built in 30 big cities across the country.

Two other projects seek to boost the culture and arts scene by offering incentives, which, in turn, will contribute to economic growth by creating new revenue for the country as it aims to secure a spot among the world's leading economies. SANDES, short for "Support for Arts" in Turkish, will offer incentive packages ranging from loans or sponsorship deals to artistic projects, while Culture Sponsorship Awards will be handed to patrons of the arts and cultural activities.