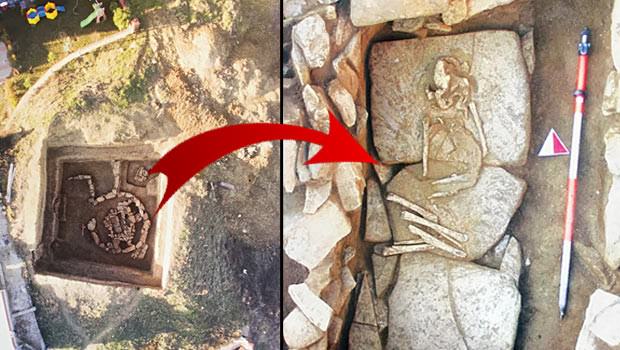 The Istanbul Archeology Museum announced on Monday that they have made the largest archeological discovery of the year by unearthing "A 5,000-year-old tumulus, the oldest ever found in the country" in the Istanbul district of Silivri. The discovery is expected to shed greater light on the history of Istanbul and the wider Thracian region.

According to reports, archeologists have found the 5,000-year-old kurgan-type tumulus, considered the first completely intact tumulus of its kind to be excavated, during a rescue dig which started in December 2015 at a summer residence complex in the Çanta region of Silivri.

A report submitted in April by the First Istanbul Board for the Protection of Cultural Artifacts stated that the tumulus likely belongs to a prominent Bronze Age soldier or warrior who came from the north, as he was buried with a spearhead.

Moreover, it was stated that treasure hunters had previously attempted to dig up the tumulus several times, but were unable to reach the main burial chamber.

Professor Mehmet Özdoğan from the Istanbul University Department of Archeology said that he has previously studied kurgan-type graves in the past, and such graves had been destroyed. However, he noted that this discovery is a prominent one, as it is the oldest of its kind found in Thrace and will shed light on a number of historical questions.

Özdoğan discovered a kurgan tumulus dating back to 1200 BCE in 1980 during surface explorations in the village of Asılbeyli in Kırklareli, located in eastern Thrace.

The Istanbul Archeology Museum has reportedly requested for the area where the grave was found to be officially registered and for the remains of the grave to be moved to the museum where they can be displayed.

The fate of the tumulus will be decided in line with a decision by the preservation board.

A kurgan is a type of tumulus that is widely found in eastern European and central Asian archeology. It is considered as a "sacred burial" in Turkic and Altaic cultures. The word is originally borrowed from an unidentified Turkic language and means "fortress" in Turkish.

Kurgans were constructed for burials during the Copper, Bronze and Iron ages, as well as in Antiquity and the Middle Ages to a lesser extent, and are believed to have affected the culture of neighboring peoples who did not have such burial practices.

Philip II of Macedon, the father of Alexander the Great, is one of the most prominent historical figures to have been buried in a kurgan located in Greece.