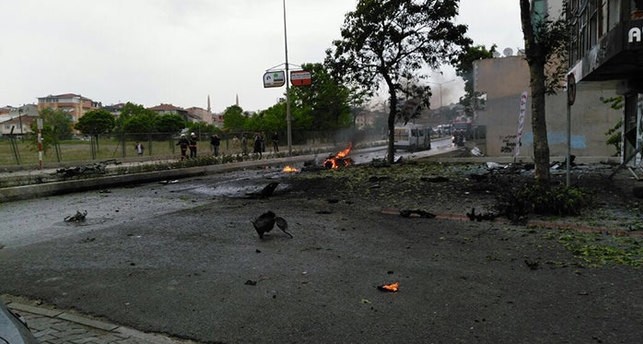 The PKK terrorist group on Tuesday said it carried out a May 12 car bomb attack that wounded eight people in Istanbul's Sancaktepe district near military barracks.

Istanbul police had detained eight suspects last Thursday for alleged relation to the attack in Sancaktepe, but later on two suspects were released.

The 7th Anatolia Criminal Magistrate of Peace on May 16 ordered the arrest of M. A. U., Ş. U. and Irfan K., who is allegedly the driver who parked and detonated the bomb-laden car, on charges of 'disrupting the unity and territorial integrity of the state'.

The explosion took place near the entrance to the military garrison in Sancaktepe as the evening rush hour began.

Istanbul Governor Vasip Şahin had said that five soldiers and three civilians were injured as a parked car exploded while a military minibus carrying personnel left the military barracks located in the Samandıra neighborhood. Şahin said that one female civilian personnel was in critical condition, while others were slightly injured.

The Turkish Armed Forces released a statement after the incident stating that explosion that took place around 4:40 p.m. slightly injured two military personnel while the other four and the driver of the military bus received outpatient treatment as precaution.

In its terror attacks against Turkish security forces, PKK often kills civilians. In its bloody history, the group has also targeted civilians many times, usually labeling them as "traitors" or "degenerate Kurds aligning with the Turkish state," even though the overwhelming majority of Turkey's Kurdish-origin citizens stand strong against PKK terror andwant the militants out of their hometowns.