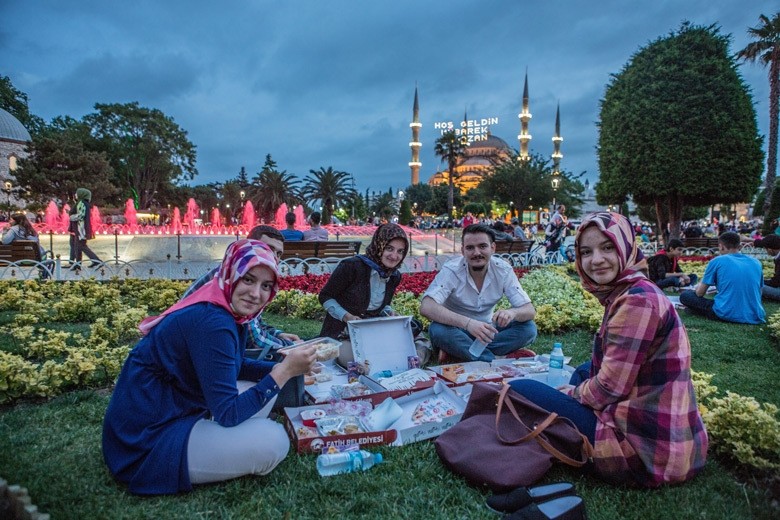 Ramadan, the ninth month of the Islamic calendar, is a time when Muslims fast from dawn to dusk, with the practice forming one of the five fundamentals or "pillars" of Islam.

Ahead of the holy month, which will begin on June 6 this year, the staff of a U.K.-based community-led initiative called the Ramadan Tent Project is making final preparations in seven cities across five countries, including Istanbul.

Ahmed Ghoneim, the project's head of communications talked to Anadolu Agency. He says that the scheme "...is not only made for Muslims."

The initiative has been organizing fast-breaking meals to include non-Muslims during the holy month. The organizing committee has non-Muslim members who have participated since a group of students from the University of London's School of Oriental and African Studies (SOAS) first came up with the pioneering idea in 2011.

"It is our privilege to have people from all walks of life attend and share their stories, meals and values with us," Ghoneim says.

An open iftar is a common event during the month of Ramadan in Turkey as well as other Muslim-populated countries.

Needy people join the meals, which typically take place under a huge tent, and break their fast together after the evening "adhan" - the Islamic call to prayer.

The Ramadan Tent Project arranges hot meals on the grounds, mostly on grassy university yards covered with colorful cloth. Volunteers serve food and guests will help with all responsibilities.

Community leaders representing various denominations including NGOs, academia, the literary world, even Christian bishops, will speak to guests in an open conversation.

"The project is vital in its peaceful and inclusive nature, as well as its representation of Islamic values and practices," Ghoneim says.

Ghoneim says that misinformation, stereotyping and confrontation are overcome through the initiative in an engaging, youthful and sincere manner that allows one to step forward, ask, learn and appreciate his or her peers.

"Many non-Muslims approached team members and asked many questions to fill gaps in their knowledge," Ghoneim says, revealing how the atmosphere created by the project is demolishing negative stereotypes about Islam.

"We, for our part also, learn valuable lessons from non-Muslims and witness on a daily basis the positive communication, friendship and amicable gestures that transcend our respective backgrounds," he says.

Ghoneim gives an example of how the project fostered inter-faith dialogue. Rabbi Nathan Levy, a religious leader who sits on the Board of Deputies of British Jews, fasted with them and attended an iftar meal in 2014.

"This example illustrates the unique and innovative methods that the Ramadan Tent Project has and continues to take in bridging communities together in a fashion that focuses on common values, constructive dialogue and creating amicable ties within the community," Ghoneim says.

Many non-Muslim guests, who fasted with them in an amazing display of solidarity, write about their feelings on the project's website after the event.

Others "directly expressed their willingness and intent to befriend Muslims to discover more about a faith and culture that they did not have the opportunity to learn about prior to attending an iftar," Ghoneim says.

One volunteer from the last year's events, who defined herself as a "young Lebanese woman from a Christian background," wrote her soulful thoughts on the project's blog:

"In a world where we are told that religion is the source of division, the Ramadan Tent Project is an example and reminder that coming together under a universal cause, that is the pursuit of good, is what is uniting more and more people around the world."

Shazma, a volunteer at an event in London's Malet Street Gardens, stated on the blog: "You never know who you'll end up next to, how their views will differ from yours, but you are all united by something stronger and the differences will promptly fade into the background."

She also described the atmosphere, as saying, "Malet Street Gardens is such a beautiful setting, and honestly speaking when the sun is setting and the candles that line the banquet … are dancing along to conversation and laughter amongst strangers, now friends, it feels truly magical."

The initiative is also benefiting from other social media opportunities, such as Facebook, Twitter and Instagram with over 7,000 followers, to hit those people who may want to join the project.

They share powerful photos and videos that reflect the project's atmosphere and convey touching passages from the guests.

It may be the most impressive point of the project that all the efforts behind it-creating a website, managing social media accounts and serving food-are by volunteers.

"The project is one very much dependent on volunteers and as such it was not a corporate strategy," Ghoneim says, stressing that commitment to their ethos, plus a growth in the number of guests and volunteers have helped the project grow internationally.

"The project grew through our guests, volunteers and online awareness; many of our team members took the project to their own localities," Ghoneim said.

After the first iftar in London, volunteers have widened the project. In 2015, open spaces were set up in Manchester and Plymouth in England; Istanbul; and Ndola, Zambia.

The project will also take place this year in Portland, United States and Toronto, Canada between 6th June and 5th July this year.

Anyone who wants to be a volunteer in the project can apply via social media. The project says it has an open-door policy and welcomes any help, including food and drink provided by interested guests.

Omar Salha, the founder and director of the initiative told Anadolu Agency: "We focus on quality rather than quantity."

Salha said the project was based on four main pillars; the first is catering to international students who are fasting abroad without the warmth of their families while the next is providing food for the homeless.

The others are combating Islamophobia and other negative stereotypes by showcasing the values of Islam; the final pillar is bridging communication between various faiths and to create a stronger sense of social cohesion.

Both committee members of the project, Salha and Ghoneim emphasized that similar initiatives and ideas should be developed in a world where religious differences and stereotypes have taken center-stage.

"This kind of project is an example of how a small number of young people can build a project together with important aims and carry it out on both a local and international level," Ghoneim states.

"Moreover, the project also underpins aspects such as interfaith dialogue and charity that can at times be neglected in the busy, high-tempo lives we all live today," he adds.

The Ramadan Tent Project won the Student-Led Volunteer Project of the Year award in 2014 during the Make a Difference Celebration organized by the SOAS Volunteering Unit.

According to the committee members, more than 30,000 people have been involved throughout the years, including guests and volunteers.