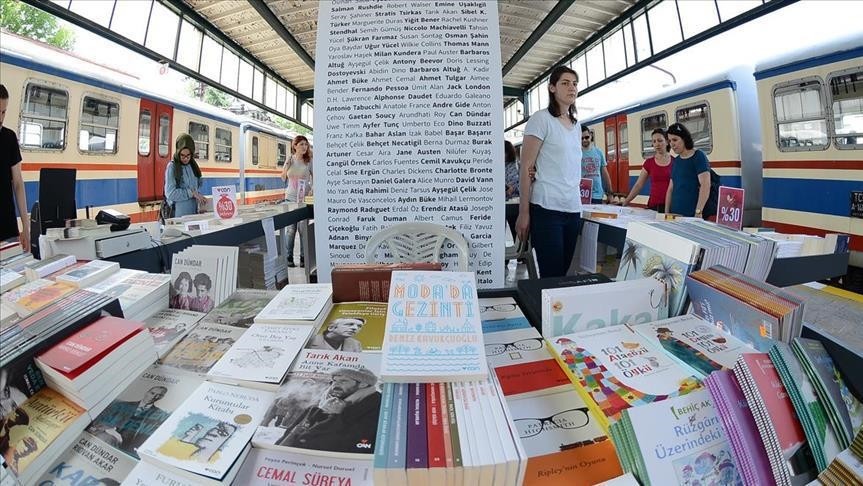 Both books and trains represent acts of traveling from a departure point to a destination, says a poet attending Istanbul's book fair held for the first time at the city's historic Haydarpaşa Railway Station.

"Right over there is the history itself: Haydarpasa train station - the place that has been the topic of literature and art many times," says Sezai Sarıoğlu, author and poet, whose books are published by Komşu-Yasakmeyve Publishing.

Sitting in front of an old train carriage, Sarıoğlu says the railway station is "now an authentic place where history comes together with the contemporary."

He is one of over 500 authors and poets at the fair organized by the municipality of Kadıkoy, a district on Istanbul's Asian side.

The five-day fair, which started on Wednesday, will host nearly 100 publishing houses on the railway platforms.

The event is expected to bring thousands of book lovers together with their favorite authors.

"This meeting is so meaningful," says Aleksis Kambures, 33, from Greece. "Because, trains are means of transportation that take people away to different places, just like books, which also take people to distant lands."

Kambures has been living in Istanbul for six years and working as a volunteer at Istos publishing house.

"It is rare to see a book fair held in such a historic place," he says.

Inside a passenger car are seven-year-old students from a primary school, each in a seat reading a book.

"I love reading, and I love trains," says Zeynep Öztürk, adding she has traveled by train many times before, or was it with the subway..?

"I wish the idea had been thought of much earlier," sighs Ufuk Kaan Altin, author and one of the founders of Mylos - a boutique publishing house in Istanbul.

"Journey is one of the main themes in literature; both physical and inner. We can see the two here," he says.

Complaining that most of the other book fairs have practically become strictly commercial venues, the author hopes that the event at Haydarpasa will become tradition.

The poet Sarioglu agrees, saying book fairs organized in large culture centers are "modern and industrial" and not warm enough in terms of atmosphere, thus limiting interactions with the readers.

"There should be a poetical side to the venue. We can see it here at Haydarpaşa."

A middle aged housewife, Ayla Güçlü, points out that the fair being at the railway station is good "also because it is located in the city center".

"Haydarpaşa can be protected with cultural events like this," she says opposing any possible plans of turning the historic place into a hotel or something similar.

Haydarpasa was built 106 years ago during the reign of Ottoman Sultan Abdulhamid II. It has long stood as the symbolic gateway to the city on the Asian side near the Bosphorus.

In 2010, a fire severely damaged the central and northern parts of the Haydarpaşa station's roof. Restoration of the building immediately followed.

The station, operated by the General Directorate of Turkish State Railways, was then closed in January 2012 to allow for the construction of a high-speed line between Istanbul and Ankara.

Since then, there have been claims that the historic building -- in an area of around 92,000 square meters -- will be turned into a luxury hotel, or a shopping mall.

Locals have repeatedly reiterated that any restoration project that includes additional construction to the historical building would be denied.

They do not want the new projects to harm the historic nature of the building.

"Now, the abandoned station is home to one of the best activities in the city," says university student Nazlı Badak, 23, responsible for stalls of Iletisim publishing house at the event.

"You feel completely free here with the trains and books in the open air - unlike the boring nature of indoor activities."

The book fair will be open until Sunday between 10 a.m. and 10 p.m. There is no entrance fee.