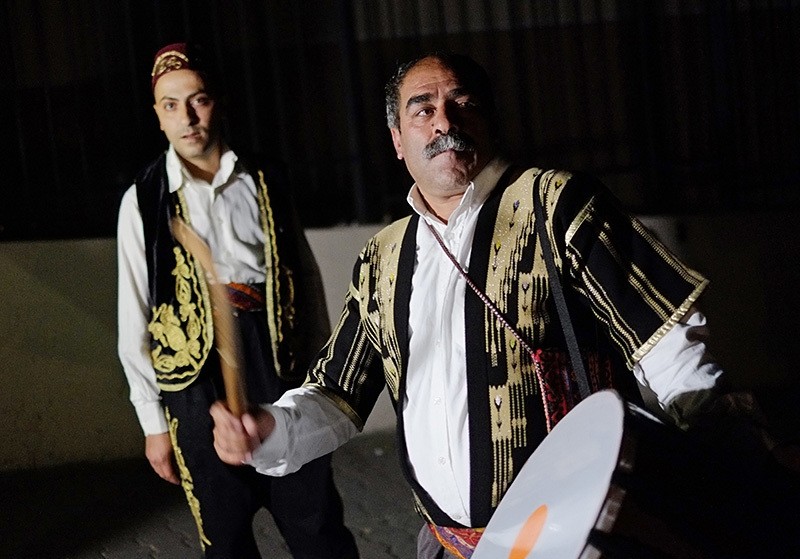 In the dark of night, when the streets of Istanbul enjoy a rare moment of quiet, Ali Buldu sets out beating his drum to wake up his neighborhood. For most, Buldu's passing is a welcome sign that the Muslim month of fasting and prayer has begun.

The 55-year-old decked in traditional Ottoman attire has been making these pre-dawn Ramadan rounds for half of his life. It's a tradition he treasures, just like his forefathers did, and one that he is trying to pass on to the next generation.

Roughly 2,000 drummers wander around Istanbul's neighborhoods during Ramadan, a time when Muslim families fast from sunrise to sundown and come together for prayer and copious meals sweetened by dates and pastries to break the fast. The drummers wander the streets to wake up residents for "sahour" — meals eaten before dawn.

"The Ramadan drummer has existed since the age of the Ottomans," Buldu says with pride as his 23-year-old nephew Emrah, who is joining him in the tradition, vigorously stirs sugar into his teacup before they march off in different directions at the speed of seasoned soldiers.

Throughout the year, Buldu and many of his male relatives earn money by playing at weddings and other festivities. But during Ramadan, they rely on the generosity of residents to survive.

"During Ramadan, we don't have a job as no one organizes weddings," he tells The Associated Press before his first outing of the year. "May God bless the neighborhood residents, we take tips from those who (want to) give."

On average, Istanbul's drummers are in their forties or fifties. Most young people are not interested in taking on the task and seek out different jobs, says Buldu who picked up the sticks when his uncle died. Sometimes, the veteran drummer worries the craft will disappear and that drummers will be unceremoniously replaced by alarm clocks.

However, the introduction of Ottoman costumes five years ago and official membership cards for those who play have restored a sense of pride to the age-old tradition and helped expand the network of drummers in the booming metropolis.

In the past three years, the ranks of drummers have grown from about 900 to 2,000, says Selami Aykut, a neighborhood administrator in the middleclass district of Bahçelievler. Before, there would be just one drummer per neighborhood.

"We want to keep the old traditions alive," Aykut tells the AP after his family shares a light pre-dawn meal.

The practice is welcomed by most, except a small minority who are bothered by the bang of the drum — typically the elderly, sick or mothers with young babies, Aykut says.

"It is important because people know that Ramadan has come from the sound of the drum," he says. "People were complaining because they couldn't hear the drummers on the streets anymore."

There is not much money in the business, with drummers knocking doors twice in the month to collect bakhshish, a small reward that can run from less than a dollar to around $20.

But for Buldu's young nephew, who is bucking the trend among his contemporaries, the best reward is keeping the tradition alive.

"It makes people happy and it makes us happy to play during Ramadan," Emrah Buldu says.