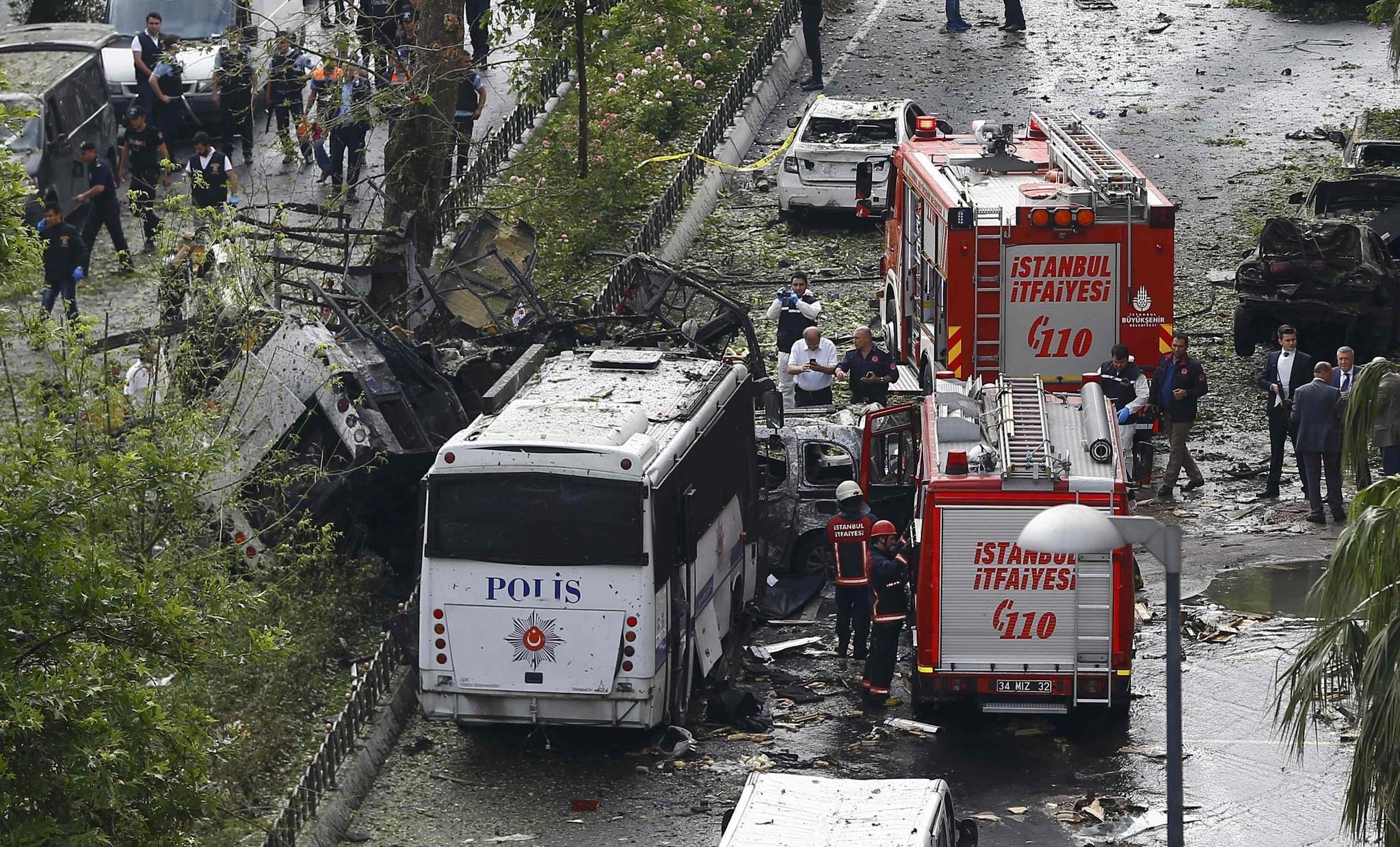 An explosion hit Istanbul's Beyazıt district at the Vezneciler metro station as a riot police shuttle bus was passing on Tuesday morning, killing 12, injuring 42 others.

The explosion took place at the metro station close to Istanbul University at around 8:30 am.

A number of gunshots were reportedly heard after the explosion Istanbul's Beyazıt district, but it has not been confirmed whether there was a clash or not.

Turkey's state-run Anadolu news agency (AA) reported later on in the day that four suspects were detained in connection to the attack.

Istanbul Governor Vasip Şahin said that seven police officers and four civilians were killed in what appears to be a car bombing terror attack. Şahin added that 36 others were also injured in the blast, including three in critical condition.

"A car-bomb attack was made against vehicles carrying our rapid-response police and passing by on the road, resulting in seven police and four civilians losing their lives," Şahin said.

One of the injured civilians succumbed to wounds at the hospital where he was receiving treatment, Ihlas News Agency reported. The report also stated number of injured as 42.

Prime Minister Binali Yıldırım and Interior Minister Efkan Ala were also briefed on the attack by Şahin.

President Recep Tayyip Erdoğan visited the wounded at Istanbul's Haseki Hospital. Erdoğan condemned the attack, speaking to reporters after his visit to the hospital. He said, "From terrorists, attacks like today's in Istanbul can be expected all the time," emphasizing that clues about the attack will be gathered as soon as possible.

The president further said Turkey's fight against terrorists will continue "to the end" and the attack was "unforgivable".

"Terror has once again shown its ignominious side. Turkey will continue its uncompromising anti-terror fight," Prime Minister Binali Yıldırım said.

"Terror attacks are committed against Turkey's democracy. We are determined to protect our democracy. Turkey's anti-terror fight is also important for the region's, EU's security," Çelik said.

The U.S. ambassador to Turkey John Bass also condemned the attack, adding that Washington stood "shoulder to shoulder" with Turkey.

"Deeply saddened by the barbarous terror attack in Istanbul. Such senseless violence could never be rationalised by any cause," John Bass wrote on Twitter. "We condemn this heinous attack, and continue to stand shoulder-to-shoulder with Turkey in the fight against terrorism."

3/3 Amb. Bass: We condemn this heinous attack, and continue to stand shoulder-to-shoulder with Turkey in the fight against terrorism.

Meanwhile, police evacuated the area and exams being held at nearby Istanbul University campus were postponed. The blast also caused damage to nearby buildings and vehicles.

Ambulances were dispatched to the scene and the injured transported to nearby hospitals. There has been no claim of responsibility thus far.

Turkey has been a target for the PKK, Daesh and DHKP-C terror groups in recent months.

Two suicide bomb attacks in October, 2015 outside Ankara's main train station killed more than 100 people as people gathered for a peace rally. It was Turkey's deadliest attack on record. The prosecutor's office said the attack was carried out by a local Daesh cell.

On January 12, Daesh targeted Istanbul's Sultanahmet, concerning which the city's governorate released a statement saying that 10 were killed and 15 injured in the blast.

On February 17, a bomb detonated while military service vehicles were passing by killed at least 28 civilians and military personnel and injured 61 others in Ankara. Official statemens said the Syrian terror group YPG was behind the attack.

Another attack in Ankara took place on March 13 in which 37 civilians were killed and nearly a hundred others were injured. The attack was also blamed on the Kurdistan Freedom Falcons (TAK), a group affiliated with the PKK terror organization.

On March 19, a Daesh suicide bomber killed four people and injured 36, many of whom were foreigners, on Istanbul's tourist-heavy Istiklal street on a Saturday.

The PKK, also listed as a terrorist organization by the U.S. and EU, resumed its 30-year armed campaign against the Turkish state in July last year. Since then more than 500 security force members have been martyred and around 4,900 PKK terrorists killed.