Shoe shiners of Istanbul holding on despite falling business 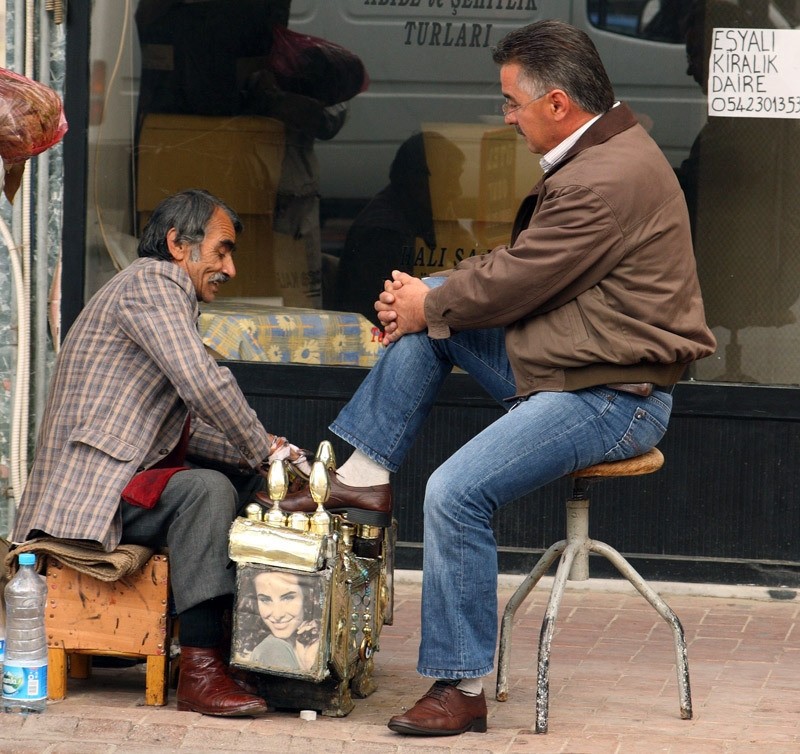 Can Çağlayan was only 10 years old when he grabbed a shoeshine kit and began working in the teeming streets of Istanbul to support his divorced mother.

Now aged 54, Can has managed to help his two children receive an education, something which he never, as a former child laborer, received.

Working from 7 a.m. to 7 p.m. every day in the Eminönü tourist district of Istanbul, Fevzi Usta, another shoe shiner in his mid-70s, says he was forced to choose this profession because he could not obtain an education beyond fifth grade.

"I couldn't afford to buy books because my family had no money, I would use my friends' books," Fevzi says.

Can and Fevzi are two of Istanbul's numerous street shoe shiners, men of hard graft perched on small stools with their gear, waiting for customers with dusty footwear to stop by.

Now suffering from a drop in customers, small earnings and long hours on the busy streets, the number of shoe shiners in Istanbul has dropped over the years, both men said.

One of the reasons behind Can and Fevzi's suffering business is what has saved many people from aching feet: sports shoes.

"[Business] was fruitful in the past," Can says and opens a drawer in his box to reveal 50 Turkish liras ($17) -- the total amount of money he had made for the day.

"Life has become so expensive; I can't even afford to buy meat anymore," he says.

"Everybody is using sport shoes," he complains, adding that his only customers are lawyers looking to shine their leather shoes at the last minute before a meeting.

Can says the lawyers, whom he only charges five Turkish lira a time ($2), complain about their lives and say they are unhappy.

"If they are unhappy [about their lives] then what should I do?" he asks.

Rakip Sanir, a 76-year-old shoe shiner who also works in Eminönü, said the only hope he has of maintaining his business is tourism. Visitors will often stop and make conversation with him, if he is charming enough, he can earn a small tip.

Turkey's footwear industry has developed at a fast pace and is now the second largest in Europe after Italy, according to a 2013 study by Ankara-based Middle East Technical University.

The study says Turkey's shoe sector had an export value of $441 million and an import value of $871 million in 2011 and that the countries with major markets for Turkish-made shoes include Germany, Bulgaria, the United Kingdom, France, Italy and the Netherlands.

"Business used to be very good back in the old days, but now that everybody is wearing these Chinese sport shoes, work is nonexistent," Sanir says.

"I am 76 years old now; what other job could I possibly do at this age?" he asks.

If a shoe shiner drops his brush in front of a potential customer, there is a good chance that it was not accidental.

Reports have been made about some shoe shiners dropping their brush on purpose in front of tourists, who pick it up and return it. They then receive the 'convenient' offer of a shoe shine as a token of appreciation.

However, the price of shoe shining in these cases is reported to be much higher than the common five-lira ($2) amount.

The exact number of shoe shiners in Istanbul is unknown but they remain -- for now -- a part of the city's furniture, still on the busy streets with their Ottoman-style boxes and small chairs.