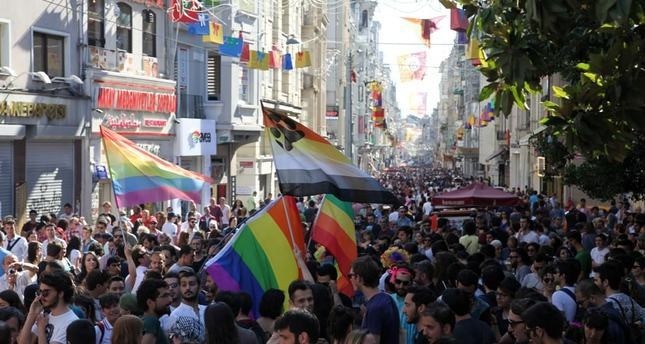 The Istanbul Governorate announced on Friday that it will not allow the annually planned Gay Pride parade that was to start in Istanbul's busy Taksim Square to take place, in the wake of the shooting at a gay club in the U.S. that claimed the lives of 49 people.

The LGBT Pride March, organized by nongovernmental organizations, was scheduled to be held this weekend in Taksim, home to the city's most famous square and one that often remains off-limits to rallies. The Gay Pride parades in past years at the same spot went smoothly except for minor scuffles with police.

Nevertheless, last Sunday's shooting in Orlando, Florida and the current climate of fear in Turkey, especially after two deadly DAESH attacks in Istanbul, including one on İstiklal Avenue where the parade is held every year, prompted security concerns.

The governorate said a rally or march would not be allowed from Jun. 19 to Jun. 26 in Taksim "for the safety of citizens and maintaining public order." The governorate suggested other authorized areas for rallies.

Taksim Square is among the few places in Istanbul where authorities frequently ban rallies. The governorate also did not allow labor unions to mark Labor Day in May at the square, which lies in a busy district popular with tourists and locals and close to main arterial roads. The square is also next to Gezi Park, where demonstrations broke out in 2013, and has seen violent clashes between police and protestors many times.