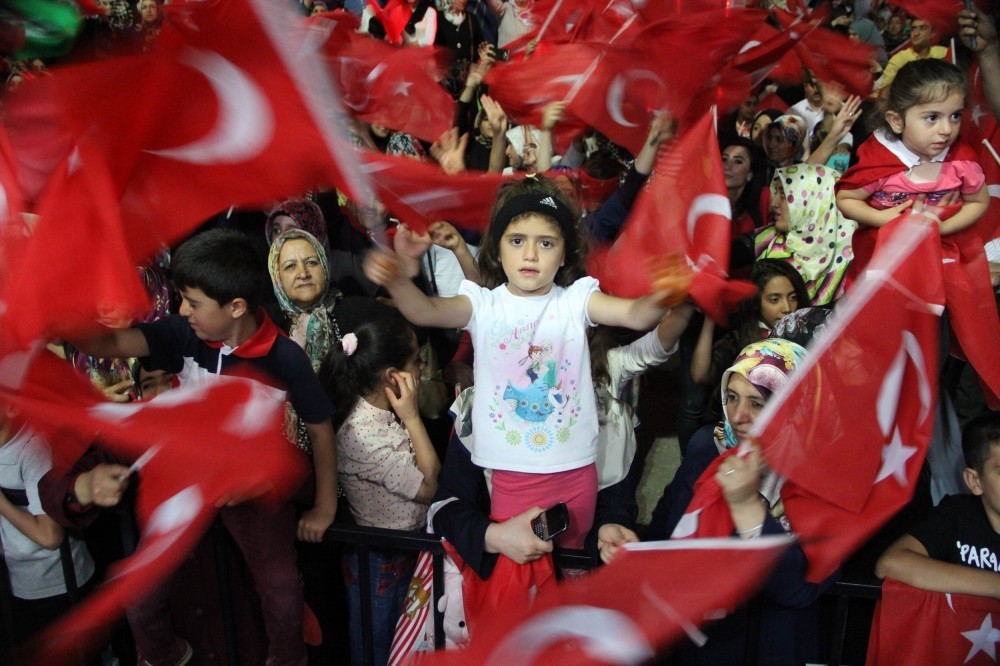 A girl wavesa flag at a democracy rally in Van. Democracy rallies occured after calls by the president and prime minister.
by Daily Sabah Aug 01, 2016 12:00 am

Nationwide rallies, referred to as 'democracy watches,' organized by the country's leaders after the recent coup attempt, are expected to end on Sunday as President Recep Tayyip Erdoğan hinted that the government plans to 'crown' the watches with a large rally at Istanbul's Yenikapı Square

Thousands of people have been in the country's squares and streets since July 15, when a Gülenist junta attempted to seize control of the country, only to be quashed by pro-democracy activists, police and anti-coup soldiers. After President Recep Tayyip Erdoğan and Prime Minister Binali Yıldırım called on the public "to claim the streets" on the night of the putsch, people have shown no sign of ignoring or abandoning the call.

The rallies, named "democracy watches," may culminate in a massive rally on Aug. 7, President Recep Tayyip Erdoğan said in a live broadcast interview on Saturday night. The events, regarded as a continuation of the civilian resistance to the coup attempt during which hundreds of unarmed civilians and police officers were killed by pro-coup troops, are an everyday occasion now in most cities.

Erdoğan said he would propose that Istanbul host a rally on Aug. 7 that would attract citizens, political leaders, high-ranking military officers, artists and athletes. "Let the nation be there together," Erdoğan said. "Accelerating the process of normalization is extremely important for our country."

On Monday President Erdoğan invited CHP leader Kılıçdaroğlu and MHP leader Bahçeli from the opposition to give speeches at the rally in Yenikapı Square.

Turkey is still under a state of emergency that was declared a few days after the coup attempt as Ankara strives to purge the Gülenist Terror Organization (FETÖ) from all state institutions, including the military, and officials have stated the risk of a new attempt against the country's stability was still not over in a bid to keep democracy activists on the streets. It was the public that was at the forefront of anti-coup efforts and the public resistance against tanks and troops indiscriminately opening fire on them has been hailed as a new chapter in Turkey's democratic history. More than 230 people died and nearly 2,200 were injured during the attacks that night.

In the latest rallies in Istanbul, people gathered on Saturday night at Taksim Square and in Kısıklı, outside President Erdoğan's residence, and at squares in the districts of Esenyurt, Sultanbeyli, Zeytinburnu, Saraçhane, Esenler and Bağcılar. Deputy Prime Minister Numan Kurtulmuş and Erdoğan's daughter Esra Albayrak were among the figures addressing the crowds at the "democracy watch" in Saraçhane and Kısıklı respectively.

Kurtulmuş told a fervent crowd, denouncing the coup attempters as a "gang of traitors," that those behind the foiled putsch would receive the "heaviest sentences they can receive." He said the country's streets, filled with pro-democracy rallies, were a "stronghold of democracy." Kurtulmuş said that the Turkish nation grew up with their ancestors' stories of resistance in World War I and has now showed it can inspire "a new saga." "Standing against the tanks [without arms] requires bravery. Teenagers, senior citizens, everyone confronted tanks and surprised the coup plotters," he said. When the crowd broke into the slogan "We want the death penalty [for coup plotters]," Kurtulmuş said those involved in the coup attempt would pay for what they did and would receive the heaviest possible sentence.

Esra Albayrak was with her father at a vacation resort in southwestern Turkey on the night of the coup and recounted that night in her address to the pro-democracy activists. The 33-year-old Albayrak said she witnessed the damage that the 1997 coup wrought on Turkish society, but the July 15 coup attempt was "a completely different kind of coup attempt" and it also showed what it really means to defend the country for people of all ideologies, ethnicities or other differences. "The [coup plotters] did not expect the public to stop the coup attempt but this nation, as it did before, foiled the plans of this country's adversaries," she said.
Last Update: Aug 01, 2016 6:25 pm
RELATED TOPICS