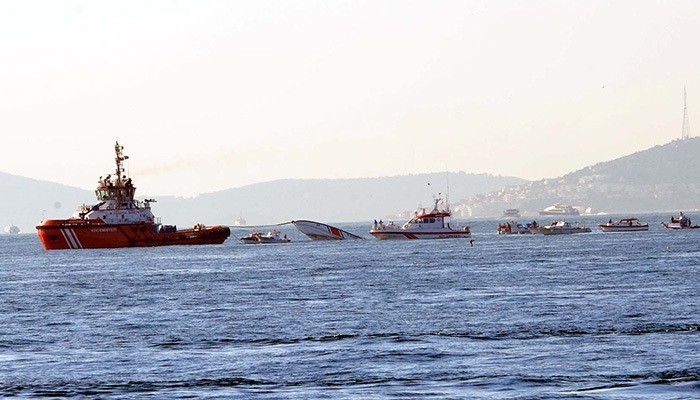 Three soldiers were killed after a coast guard boat collided with a bulk carrier and capsized in Istanbul's Bosporus Strait on Wednesday.

Traffic in Bosporus, a key international shipping lane for oil and grain, was briefly suspended.

The collision occurred at 8:40 a.m. (0540 GMT) at the southern end of the strait, forcing the capsize of the coast guard vessel, GAC shipping agency said, identifying the cargo ship as the M/V Tolunay, a Cook Island-flagged bulk carrier. The ship was heading to the Black Sea along the waterway when it ran into the boat carrying eight soldiers off the Fatih district coast. The boat capsized on impact. The cause of the accident is not known and the ship was towed to the Sarıyer coast at the northern end of the waterway. Istanbul Governor Vasip Şahin told reporters that other Coast Guard boats and rescue crews from maritime police recovered all the soldiers from the boat. Three injured soldiers succumbed to their wounds at the hospital.

Turkey's straits are among the most at-risk waterways in the world, according to experts. Over 50,000 vessels, including tankers carrying highly flammable materials, pass through the Bosporus, an S-shaped channel with sharp turns and changing currents that pose challenges to vessels and sailors every year. In compliance with the 1936 Montreux Convention, Turkey must allow open access to all civilian vessels through its straits in peacetime.

To change vessels' courses, especially large tankers, the government plans to build "Kanal Istanbul," an ambitious project to dig a channel through the European side of the city.

More than 3 percent of the global crude supply - mainly from Russia and the Caspian Sea - pass through the 17-mile Bosphorus that connects the Black Sea to the Mediterranean.