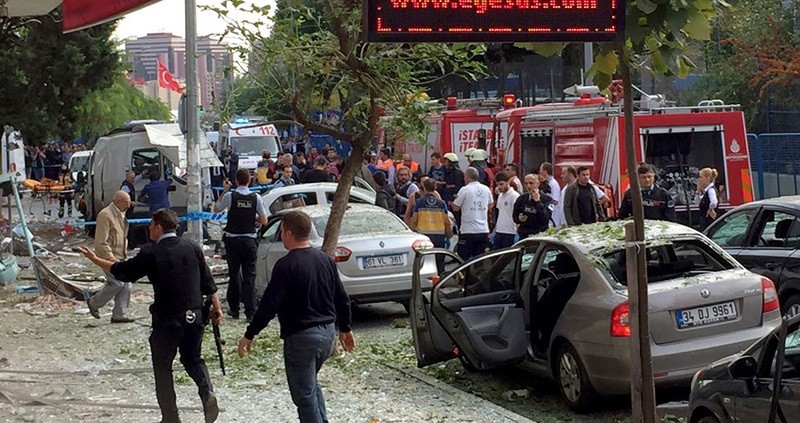 An explosion near a police station rocked Istanbul's Yenibosna neighborhood on Thursday, injuring at least 10 people. Later on the same day, 6 PKK members have been detained, including the prime suspect, who is considered to be the "main perpetrator" of the attack, police said.

Initial reports suggested that five people were injured in the blast with one in a serious condition. Istanbul Governor Vasip Şahin confirmed the injury toll in a post on his Twitter account, saying that a bomb laden motorcycle was detonated at Bahçelievler district, where Yenibosna is located.

Şahin later said that 10 people were injured in the explosion, and none of the wounded are in serious condition.

Initial reports suggested that the explosion was caused by a car bomb, and police are looking for a suspect with a black jacket and black helmet near the blast site.

A witness located in a private school next to the explosion site told Daily Sabah that the blast was massive, and gunshots were heard after the explosion. Another witness, who was at the Yenibosna metrobus station located some 500 meters away from the explosion site, said that the ground was shaken by the blast.

Initial footage from the blast site showed shattered windows along the street in addition to damaged cars.

Ambulances were dispatched to the scene while police units cordoned off the area.

No one claimed responsibility for the attack.

The police station, located near a busy intersection in one of the city's most populated districts, was also attacked in 2012 by two assailants who opened fire on security personnel in the building, injuring one police officer.

The terrorist group Revolutionary People's Liberation Party-Front (DHKP-C) claimed responsibility for the 2012 attack. The DHKP-C, which was behind a string of headline-grabbing attacks, like the suicide bombing of the U.S. embassy in Ankara in 2013 and a string of attacks in Istanbul last year including one at an Ottoman-era palace, is less effective than the PKK and Daish, two terrorist groups that were behind major attacks in the country in the last two years. However, the group still has supporters especially in Istanbul's working-class neighborhoods.